The HRP-1 was the world’s first successful tandem-rotor helicopter. It led to the development of the Boeing Chinook family of aircraft that would serve in many nations into the 21st century.

Frank Piasecki’s P-V Engineering Forum produced the HRP during World War II. The company then became the Piasecki Helicopter Corp., and after Piasecki left the company in 1955, it became the Vertol Aircraft Corp., purchased by Boeing in March 1960.

During World War II, single-rotor helicopters were limited by their small payload and cramped passenger compartments, so the U.S. government asked for development of a twin-rotor helicopter that could carry troops and equipment into the battlefield. On Jan. 1, 1944, the contract went to Frank Piasecki on the basis of a demonstration of his experimental single-seat PV-2 helicopter at National Airport in Washington, D.C. Also designated internally as the PV-3, it was the world's largest helicopter at the time, with enough room for eight passengers and a two-person crew.

Originally nicknamed the “dogship” because it was a test vehicle, the U.S. Navy designated the PV-3 the XHRP-X (experimental helicopter transport, Piasecki model one), and the official Navy prototypes were designated XHRP-1. Then, the aircraft was nicknamed the “flying banana,” a name that stuck with the HRPs as well as the later H-21 series.

The XHRP-X had a lightweight, steel-tube truss frame and a fixed tricycle landing gear. The pilot occupied the front seat of the two tandem seats for the crew. At first, the pilots were protected by a Plexiglas windscreen. Later, a fabric covering increased the forward speed and enclosed the crew. A single Continental R-975 engine, located in an aft compartment, powered the two three-bladed rotors of the helicopter.

The XHRP-X made its first flight on March 7, 1945. In 1946, Piasecki renamed his company Piasecki Helicopter Corp. and completed two refined versions for the Navy: the XHRP-1 as a flying prototype and a pre-production sample of the HRP-1 Rescuer. By mid-1947, production had begun on 20 HRP-1s. Three went to the U.S. Coast Guard in 1948 and the rest to the Navy and Marine Corps. The HRP-1s served with Marine helicopter squadron HMX-1 to develop vertical assault tactics.

The first recorded search-and-rescue mission carried out by a Coast Guard HRP-1 occurred on Dec. 31, 1948. The Search and Rescue office at Elizabeth City, N.C., received a request to transport a 14-month-old baby girl, who was suffering from pneumonia, from a remote location at Cape Hatteras, N.C., to the hospital at Elizabeth City. A local newspaper report noted, “Thanks to the Coast Guard, the girl is alive today.”

The next variant was the HRP-2, with a metal fuselage and an improved fuselage layout. Five of these went to the Coast Guard. In 1953, the HRP-2’s new fuselage was adapted to the highly successful H-21 airframe. The HRP also inspired the compact HUP series of fleet utility helicopters used throughout the 1950s, the massive YH-16 flying crane, the Boeing CH-46 Sea Knight and the CH-47 Chinook. 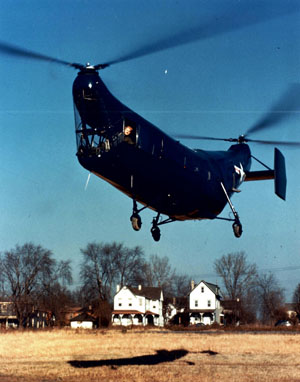