The KC-135 was the first offspring of the Dash 80. It was designed specifically for aerial refueling and for 15 years was the only tanker used by the Strategic Air Command (SAC). More than 600 of the 732 tankers built were still in service in the mid-1990s.

The KC-135 replaced the propeller-powered KC-97 tankers, which could no longer keep up with the jet fighters and bombers. In 1956, when the first KC-135 — nicknamed "The City of Renton" — rolled out of the plant, it shared the Renton tarmac with the last KC-97, providing a vivid picture of The Boeing Company's complete conversion to jet power.

During nine years of the Vietnam conflict, KC-135s made 813,000 aerial refuelings of combat aircraft. During the Persian Gulf War, the tankers made 18,700 hookups and transferred 278 million pounds (126 million kilograms) of fuel.

A total of 820 C/KC-135s were built in Renton, Wash., through 1966: 732 as aerial tankers and 88 modified for special purposes, including cargo carriers, reconnaissance airplanes, Strategic Air Command airborne command posts and transports for high-ranking government officials.

Boeing modifications that extended service capabilities of the KC-135s included re-skinning the wings with an improved aluminum alloy and installing new, more powerful and fuel-efficient engines. Two re-engined KC-135Rs could do the work of three KC-135As.

On Feb. 24, 2011, Boeing announced that it had received a contract from the U.S. Air Force to build the next-generation aerial refueling tanker aircraft, the KC-46, based on the Boeing 767 commercial airplane, to replace 179 of the service’s 400 KC-135 tankers. 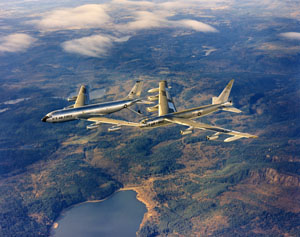