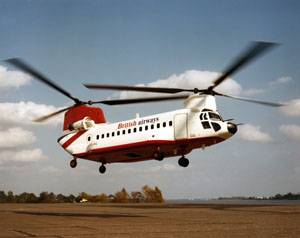 The Boeing Model 234 was the commercial derivative of the CH-47 family of Chinooks. First built for British Airways to carry passengers and cargo to offshore oil platforms in the North Sea, it incorporated many of the latest technological advances in aircraft development. These included fiberglass composite rotor blades, composite airframe structures, improved engine and drive systems, advanced avionics, and a triple cargo-hook suspension system.

The Model 234 had more windows than its military counterpart and had a longer nose to house weather radar. The utility version, the Model 234UT, had a 51,000-pound gross weight capacity and could lift extremely heavy equipment, pipelines, towers, bulk containers or even another helicopter.

The long-range passenger version, Model 234LR, could fly 644 miles and had an interior design much like Boeing commercial airplanes, including a galley and overhead bins.

In addition to its service as a commercial transport, the Model 234 proved to be useful in a variety of functions. In 1987, a Model 234 established a new record for hanging wire when it strung two power lines from 570-foot-high transmission towers 1.5 miles apart on either side of a river in China.

Model 234s also were used to harvest timber in Washington state. On fire duty in 1988, they dropped more than 2.25 million gallons of water in 13 days on forest fires near West Yellowstone, Mont.