The Douglas O-2 observation biplane had longer wings, had lower landing speeds, flew higher and was 22 mph (35 kph) faster than its competitors. The O-2, produced for the U.S. Army Air Service, was the first of a series that remained in production for nine years.

Douglas designed its first experimental observation aircraft, the XO-2, in 1923 and delivered 45 of the first production version, the O-2. On Feb. 16, 1925, a contract was signed for 75 of the O-2 type, the largest single contract in terms of production units the company had yet received.

An O-2BS, made for pilot James Dalzell McKee, after whom the Canadian aviation McKee Trophy is named, made the first single-aircraft, single-pilot flight across Canada. Because of the many Canadian rivers and lakes, twin floats were installed on the landplane. Between Sept. 11 and 19, 1926, McKee flew the 3,000 miles (4,828 kilometers) between Montreal and Vancouver, British Columbia, in 35 hours, 8 minutes, at an average speed of 85 mph (136 kph). The plane later was modified as a three-seater and used by the Canadian government until January 1930 as a high-altitude photographic survey aircraft.

Later O-2 variants had a more streamlined fuselage and a two-blade metal propeller instead of the previous wooden propeller. Some were modified as basic trainers by adding flight controls and instruments to the rear cockpit.

During the 1920s and early 1930s, the Douglas observation biplanes were among the most important American military aircraft. During the 1934 airmail emergency, when President Franklin Roosevelt directed the Army Air Corps to take over from private contractors because of suspected improprieties in awarding contracts, Douglas biplanes flew the U.S. airmail routes for 78 days. Between 1923 and 1936, the company sold 879 in the series, one as a civil aircraft, 108 to foreign air forces and 770 to the U.S. military services. 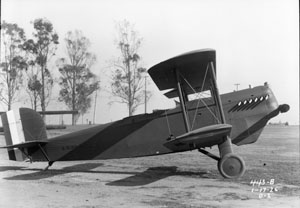