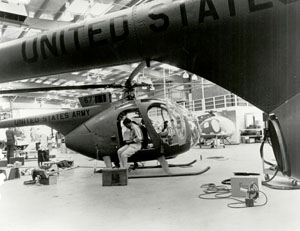 Initially called “Loach,” an adaptation of its acronym, it was officially called the “Cayuse.” It was also known as the “Flying Egg,” and when equipped for combat, the helicopters were known as “Killer Eggs.”

The modern-day OH-6 variants flown by the U.S. Army’s Special Operations Forces are known as "Little Birds," and because of their ability to strike undetected during darkness, gave Task Force 160, later the 160th Special Operations Aviation Regiment (Airborne), the name “Night Stalkers.”

The Army initially ordered 1,438 OH-6As for use during the Vietnam War. First flown in February 1963, the OH-6A Cayuse entered service in September 1966, establishing 23 world records for speed, distance and altitude. The Cayuse was Hughes’ longest-running helicopter program and, during the Vietnam War, as many as 100 OH-6As were built a month. The OH-6D was an improved version with more advanced electronics and heavier armament.

The OH-6 was also exported as the Model 500 Defender. It served in Granada and Panama during the 1980s, as well as in the Persian Gulf wars, Somalia and the Balkans. The commercial version was the Hughes 500, which became the MD 500 series after McDonnell Douglas acquired Hughes Helicopters in January 1984.

The MD 520N® pioneered the NOTAR® anti-torque system concept that replaces the traditional tail rotor, using compressed air to offset torque instead of a conventional tail rotor. Versions also included the Model 530 Defender, a variant with refined aerodynamics and more power, and the AH-6 Model 530 version for U.S. Special Forces. A NOTAR version of the heavy-lift Model 530 became the MD 530N. Variants included the AH-6J attack helicopter and MH-6J insertion and extraction transport, based on the MD 530F. These featured a more powerful engine and improved avionics, including an embedded global positioning system/inertial navigation system and forward-looking infrared.

By that time, more than 4,700 Model 500-series helicopters had been produced.