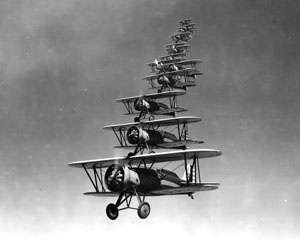 Early in 1928, Boeing built two new fighter biplanes using bolted aluminum tubing for the fuselage’s inside structure, rather than welded steel tubing, typical of earlier models. Later versions had aluminum covering the fuselage rather than fabric or wood.

Model 83, designed for the Navy, had a hook-type arrester so that it could land on aircraft carriers. Its production version was designated F4B. The Model 89, built for the Army as the P-12, could hold a 500-pound (226-kilogram) bomb.

The military bought 586 of these fighters in different versions. The first was delivered to Army Air Corps Captain Ira C. Eaker on Feb. 26, 1929, for a special goodwill flight to Central America. Later, Brazil became an international customer for the fighters.

Boeing built four commercial versions of the model; the U.S. Bureau of Air Commerce, precursor to the Federal Aviation Agency, bought one, and Howard Hughes bought a two-seat version.