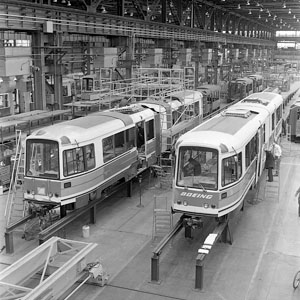 As the Vietnam War came to an end, the U.S. government looked for ways to keep its defense contractors working. Part of this effort included the Urban Mass Transportation Administration (UMTA) request for designs of a light rail vehicle to replace aging rolling stock around the country. In June 1971, UMTA selected Boeing Vertol as systems managers for the urban rapid rail vehicle and systems program.

On May 1, 1973, Boeing Vertol received the go-ahead from officials at the Massachusetts Bay Transportation Authority (MBTA) in Boston and the San Francisco Municipal Railway (Muni) to begin building 230 light rail vehicles – of these, 150 were for MBTA and 80 were for Muni. Both the MBTA and Muni would later expand their orders to 175 and 100 cars, respectively, increasing the overall cost of the contract to $72 million.

Known as the Boeing LRV (not to be confused with the Lunar Roving Vehicle), the articulated light rail vehicles entered revenue service on Dec. 30, 1976, on Boston's MBTA Green Line "D" Branch. The first regular runs on the San Francisco Muni system began in 1979.

In 1976, Boeing Vertol also began to build Model 2400 Rapid Transit Cars for the Chicago Transit Authority (CTA). A special ceremony Jan. 11, 1978, honored the delivery of the 100th RTC to the "Windy City," and the remaining 100 were delivered the same year. These stainless steel cars feature smooth curved, stainless steel exteriors and contoured fiberglass frontends. They had fiberglass seats with padded inserts, walnut grain wainscot panels and brown floors. They were the first cars built for the Chicago "L" in more than 50 years to have sliding doors, providing easier access for wheelchairs.

Some of the RTCs delivered in 1976 were painted red, white and blue to celebrate the U.S. Bicentennial. In 2014, 2400-series rail cars were in service on the Orange Line—but the CTA intended to remove the last of the 2400 series from service in October of that year, leaving about 24 cars of the series that would be retained and used out-of-service for track work.

By March 1, 1982, 114 LRVs were in Boston's MBTA active service fleet and Boeing Vertol delivered the last LRV in 1983. As Vertol moved out of the rolling stock business and back to its traditional rotorcraft production, Boston's MBTA replaced the Boeing LRV with rail cars built elsewhere and started to scrap the Boeing LRVs in 1987. The MBTA's last revenue run of a Boeing LRVs was March 16, 2007. However, the MBTA continued to operate three LRV work cars. A Boeing LRV from Boston's MBTA is on display at the Seashore Trolley Museum in Kennebunkport, Maine.

San Francisco's Muni began retiring its LRVs in 1995, after the first of their replacements arrived, and its last Boeing LRVs left service at the end of 2001. Two of the Muni cars were sent to museums: the Oregon Electric Railway Historical Museum near Salem, Ore., and the Western Railway Museum near Fairfield, Calif. Two others were stored in Muni railway yards.