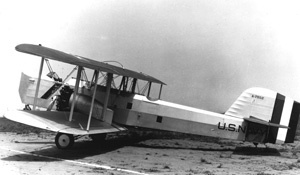 The Douglas T2D-1 (the name indicated it was the second Douglas Torpedo, first version) was the first twin-engine Douglas airplane and the first twin-engine aircraft designed to operate from the decks of aircraft carriers. When fitted with floats, it also could take off from water. Twelve of these torpedo bombers were built, and they served the U.S. Navy until 1933. With their 57-foot (17-meter) wingspan, they could fly an average 124 mph (199 kph); as a landplane, they could fly 15 percent faster than similar aircraft.

The T2D-1 had open cockpits for two pilots and a gunner/wireless operator. A fourth open cockpit in the nose had a single ring-mounted machine gun and a transparent bomb-aiming panel.

In 1928, the T2D-1s were assigned to Commander Aircraft Squadrons at Pearl Harbor, Hawaii. The T2D-1s had excellent visibility and proved particularly useful for maritime reconnaissance. They were a favorite among Navy pilots because they were easy to fly and could climb quickly with heavy loads. The Navy ordered 18 more with two rudders, rather than one, and redesignated them P2D-1s because the Navy classified shore-based bombers as patrol planes.