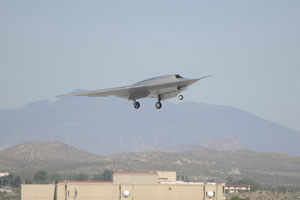 The Boeing Joint Unmanned Combat Air System (J-UCAS) X-45 was the first highly autonomous, unmanned system specifically designed for combat operations in the network-centric environment of the 21st century. The swept wing, stealthy jet had had fully retractable landing gear and a composite, fiber-reinforced epoxy skin. There were two internal weapons bays in its fuselage.

Boeing began its unmanned combat aircraft program in 1998, and the following year, Defense Advanced Research Project Agency (DARPA) and the U.S. Air Force chose Boeing to build two X-45A air vehicles and a mission control station under the J-UCAS Advanced Technology Demonstration program. During its first flight, May 22, 2002, the X-45A, nicknamed the “Elsie May,” flew for 14 minutes at NASA’s Dryden Flight Research Center at Edwards Air Force Base, Calif., reaching airspeed of 195 knots (224 mph, 361 kph) and altitude of 7,500 feet (2286 meters). Flight characteristics and basic aspects of aircraft operations, particularly the command and control link between the aircraft and the mission-control station, were demonstrated successfully.

On April 29, 2003, Boeing announced that DARPA had asked it to modify its X-45B design then in development—a larger, more capable version of the X-45A. DARPA wanted the design to evolve into a version that could meet the objectives of both the U.S. Air Force and the U.S. Navy. Boeing asked that the modified concept be called the X-45C.

In 2004, significant X-45A test flights included a precision weapon drop in April, when the X-45A demonstrator hit a ground target with a 250-pound (113-kilogram) inert near-precision-guided weapon released from its internal weapons bay, and the first unmanned, autonomous multi-vehicle flight in August under the control of a single pilot. Flight tests were successfully concluded in 2005.

In October 2006, after 64 unprecedented flights and many firsts in autonomous combat aviation, the two X-45A unmanned combat air vehicles were sent to two prominent aviation museums to be permanently displayed. One aircraft went to the National Museum of the U.S. Air Force at Wright-Patterson Air Force Base in Dayton, Ohio, and the other to the Smithsonian National Air and Space Museum in Washington, D.C.

The Boeing design for the larger X-45C went on to serve as the basis for the internally funded Phantom Ray Demonstrator.