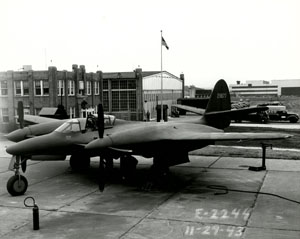 On Aug. 14, 1941, the U.S. Army Air Forces placed its first order with the tiny, year-old McDonnell Aircraft Corp. for two prototypes of a novel, twin-engine, long-range fighter with a pressurized cabin. The turbo-supercharged 12-cylinder, inverted-V, liquid-cooled engines would be housed in long nacelles and would drive four-blade propellers in opposite directions. They were to maximize the use of exhaust to increase engine thrust.

Its first flight took place on Jan. 6, 1944, with chief test pilot E. E. “Ed” Elliot at the controls. Temperamental engines caused the airplane’s first flight to last only six minutes. Further test-flight delays were caused by several bouts of engine overheating and fires. With only 40 hours on the airframe, the final blow came on Sept. 6, 1944, during a mission out of Lambert Field in St. Louis, Mo.

Shortly after takeoff, the right engine caught fire. Elliot quickly returned to base and approached for a crosswind landing, keeping the flames away from the fuselage. However, as the aircraft was coming to a full stop, a brake failure caused the aircraft to turn the burning engine upwind. Elliot escaped uninjured as the No. 1 prototype was fully engulfed in flames. The program was halted, and the No. 2 prototype, only 15 percent complete, was never finished.