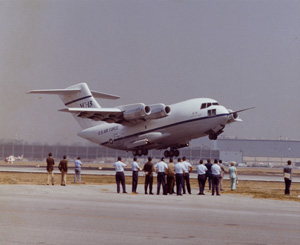 Built in response to an U.S. Air Force request for an advanced medium short-takeoff-and-landing (STOL) transport (AMST), McDonnell Douglas built two YC-15 prototypes to replace the Lockheed C-130 Hercules tactical transport. They were to be used on short, undeveloped fields, and Bell, Boeing, Fairchild, Lockheed and McDonnell Douglas submitted proposals in March 1972. Boeing and McDonnell Douglas won contracts to design and build the transport; the Boeing version was designated the YC-14 and the McDonnell Douglas, the YC-15.

The YC-15 had four engines, while the Boeing version had two. The YC-15 used large, double-slotted flaps that extended over 75 percent of the wingspan to enhance STOL capabilities. To save costs, it used a modified DC-8 nosewheel unit and the DC-10 cockpit, adapted for a two-person crew, with two lower windows for visibility during short-field landings.

The YC-15 could hold 90 percent of all Army combat vehicles, including a 62,000-pound (28,122-kilogram) extended-barrel, 8-inch (203 mm) self-propelled howitzer. Vehicles were loaded through rear fuselage doors with built-in ramps. The YC-15 introduced a number of innovative features, such as externally blown flaps, which used double-slotted flaps to direct part of the jet exhaust downwards, while the rest of the exhaust passed through and downward over the flaps, introducing the Coanda effect. It was also the first military aircraft with a supercritical airfoil.

The YC-15 first flew on Aug. 26, 1975, and a competitive fly-off against its Boeing competitor was completed in 1977. However, the Air Force decided against the AMST aircraft and terminated the program. On Dec. 10, 1979, it formally cancelled the AMST program for both the YC-14 and the YC-15. This resulted in the development of the C-X (Cargo Transport Aircraft-Experimental) — the future C-17.