I stepped off the bus into Seattle in 1939. There wasn't much in the way of opportunity in the small Montana town where I had been a waitress since the age of 15. Seattle was the nearest big city and my best bet. On my way out of town I stopped into a Butte taproom to visit a bartender, Ed Carrig. I knew he was sweet on me, but I never expected him to borrow money from his boss and insist on coming along to Seattle. We arrived with two suitcases, $80 cash and no plan. I was 22 years old.

Luckily, Ed got on as a timekeeper at The Boeing Company. It didn't pay much at first, but we got by. A few years later, when so many men went off to war, I also got a job at Boeing as a shop clerk.

I loved my job expediting parts and plans around the Seattle factory. People were so nice to me. One day a tool room manager called me over and asked if I would take a photo with some diamonds. They had just started using industrial diamonds to cut sheet metal in the shop and a magazine was interested in doing a story about modern manufacturing techniques. I posed for the photo on a lark, holding up my wedding ring and comparing it with the larger industrial diamond for the camera. After that I went back to work and didn't think much of it.

A few weeks later, while driving my cart around the factory, I heard a mechanic yell to me from on top of a wing, "Hey, Dottie! I saw you in Popular Science! You're a star!" I didn't know anything about it and asked him to show me. The next day he brought in the magazine and, sure enough, there I was! Everyone in the shop was impressed and called me a celebrity. Ed, my husband, said I looked like Elizabeth Taylor. He had the magazine page framed. Many, many years later it was the one he kept by his bedside in hospice care.

I left Boeing a few years after the magazine shoot in order to raise our family. Ed retired in the 1970s after dedicating much of his career to strengthening the International Association of Machinists union. Three of my children worked at Boeing and my two youngest retired after long careers in 2015. My daughter-in-law and granddaughter still work in the Seattle offices.

On the Boeing centennial anniversary I will be 99 years old. You beat me by a year, Bill. 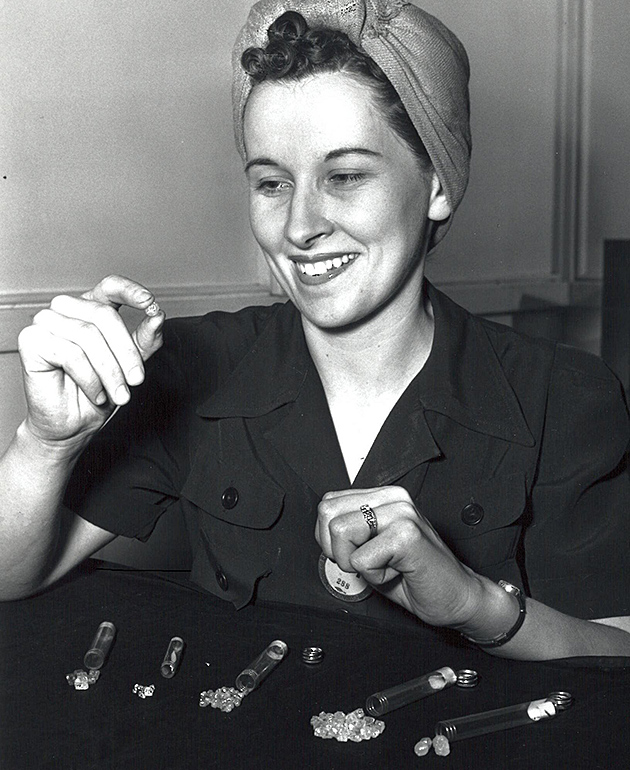 Dorothy Carrig was photographed for an article about industrial diamonds in Popular Science magazine in October 1944.