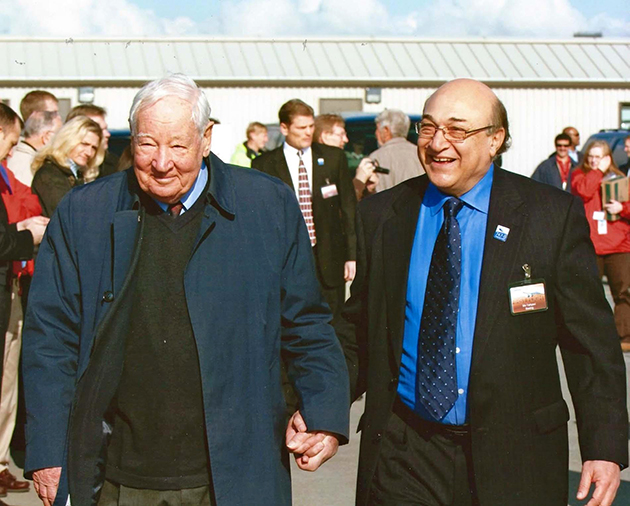 When I was a child in Iran and we as a family wanted to fly somewhere, my parents would not say, "We fly with Iran Air"; they would say "We fly Boeing." Boeing was synonymous with flying. It meant safety, reliability, comfort.

Before joining Boeing, I served as an officer in the Imperial Iranian Navy for 14 years. In 1978 I was sent to the U.S. Naval Post Graduate School in Monterey, Calif., and earned a master's degree in aeronautical engineering.

The Iranian revolution in 1979 changed the course of my life. I decided to stay in the United States. I was hired by The Boeing Company in September 1980. I started as a principal engineer in Propulsion for a new program, the 757 airplane.

One of the great things about Boeing is that when you are part of a program all the team members focus on that same project, and the success of the program depends on the success of every individual in the group.

My experience and learning from Working Together with the very talented team at Propulsion, 20 years later, gave me the opportunity to lead the team as the vice president and general manager of the Propulsion System Division.

Four years later, in September 2005, I became the Boeing Commercial Airplanes program manager for the P-8A Poseidon, a U.S. Navy aircraft. For the first time in the history of The Boeing Company, a military tactical aircraft was designed and built by the commercial and defense sides as one team, using Commercial Airplanes processes and facilities in Renton, Wash. I am proud to say that the program was successful and completed on time.

After completion of the P-8A, I became the program manager of the new 747-8 program. On Feb. 8, 2010, we celebrated its first flight. I remember that day very well.

It started as a typical foggy day in February. There were only the two pilots on board awaiting weather clearance for takeoff. After several hours of waiting, finally for a brief moment the sunshine opened a part of the sky, allowing the "Queen of the Skies," the 747-8, to take off.

I remember the loud cheer and emotion of thousands people, along with the rumble of the four GE engines at maximum takeoff power that filled the atmosphere. I also remember my hand holding tight the hand of Joe Sutter, the father of the 747 family, who was standing next to me almost all the time that day and assuring me and my team that everything will be all right.

The 747-8 Freighter took off and flew flawlessly for four and a half hours. Frontiers magazine called it "Picture Perfect."

Throughout my 31-year career with Boeing -- every day of it -- I considered Boeing as a second home or country. I felt part of the Boeing family. I had the most rewarding experience of my life.