As a child I always felt this pull toward airplanes. It was 1994. The 777 was a newborn and I was 11. There are several memories I will treasure, especially that day in April of 1994 when my father and I pulled up to the factory. I remember walking for what seemed like forever and standing in the dark, watching tails with customer liveries lighting up the ceiling, swirling around all over. Then, boom: Red, white and blue, gracing the most amazing plane and set of Pratt and Whitney engines I had ever seen. That was it for me -- the 777 has been a lifelong pursuit. I was back in June for the first flight. I watched it closely in the news, even attending a media event at Seattle's Boeing Field. In between all of that, I found time to draw Frank Shrontz (former Boeing president and CEO) a few pictures and I got a letter back.

While I didn't end up working directly for Boeing as an adult, I was fortunate to help as an electrician on the 787 horizontal stabilizer buildup tools, the 787 surge line and the new delivery center in Everett. During my time in the factory as a worker, I was able to see the first Dreamliner get handed over to ANA (All Nippon Airways) and watch the 1,000th 777 rollout ceremony. It was an emotional moment that I never in a million years thought I would have witnessed. I feel forever grateful for the thrills. I hear there's a 777X in the works. 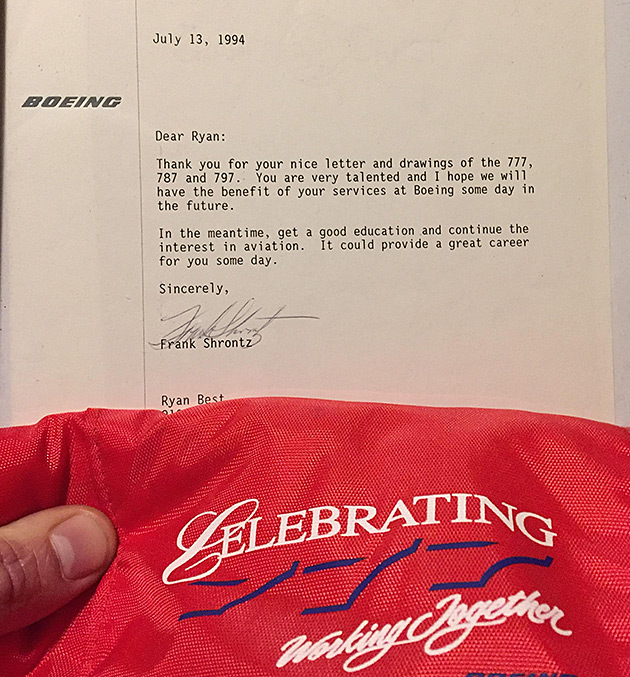 Ryan Best sent his childhood drawings to Frank Shrontz, then Boeing president and CEO, and received this letter from him in return.