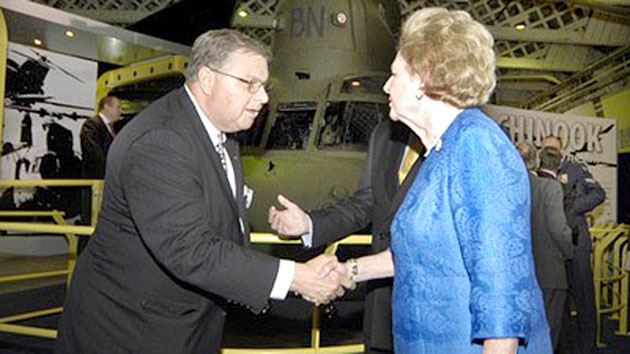 One of the greatest experiences I've had in my 35-plus years with Boeing was representing the company to senior officers at Royal Air Force Odiham, in Hampshire, England. For over a decade, from late 2002 until 2012, I performed this role for Boeing, visiting the base at least quarterly.

In early 2003, I was approached by retired Group Capt. Keith Ifould, a RAF Chinook pilot. He was now working as the BD director for the Royal Air Force Museum in Hendon, North London. He asked if there was a Chinook that could be displayed in the museum and would Boeing work with him to find one.

We set out with the museum on how best to achieve this. We wanted something more than just finding an old fuselage for static display. Eventually this grew into a "Team Chinook" activity with the US Army (Cargo PM), Honeywell (engines), Rockwell Collins (producer of the Chinook's CAAS cockpit), Summit Aviation (production house that strips components off older Chinooks) and the RAF all participating.

So the game was on. Boeing announced a large, multiyear contribution to the RAF Museum in recognition of the relationship between RAF and company. We also hit upon the idea of a permanent display, including use of a two-thirds-sized fuselage of an earlier D model rescued from Summit Aviation in Delaware. This was supplemented with historical displays and videos.

All seemed to be going well when the idea for a grand opening was brought forth. I didn't know what to do other than: Whatever it was we were going to do, it had to be big. We had to find the one individual who could epitomize the meaning of the Chinook to the UK forces.

After running through various names, we agreed that Margaret Thatcher, UK's prime minister from 1979 to 1990, was the best choice. As the longest-serving prime minister of the 20th century, her tenure in 10 Downing St. spanned initial delivery of the aircraft through some of its most heroic and memorable moments. Thatcher, while not publicly speaking at the opening of the exhibit on July 27, 2007, was the largest presence.

All attendees wanted to talk and be photographed with her. I helped host her and we talked throughout. I remember she said she was pleased the government had provided them the Chinook, as it was a rugged aircraft. She spoke about having ridden numerous times on Chinook and it always did the job. Despite her advancing years, Thatcher was a real trooper, shaking hands with most everyone and looking at each and every display.

In the end, she made the event memorable. If you find yourself in London, take a day trip to the city's northern area (Hendon) and the RAF Museum. The Chinook display is still there eight years later. With all the activities and events that have occurred in the interim, perhaps it's time to refresh it.