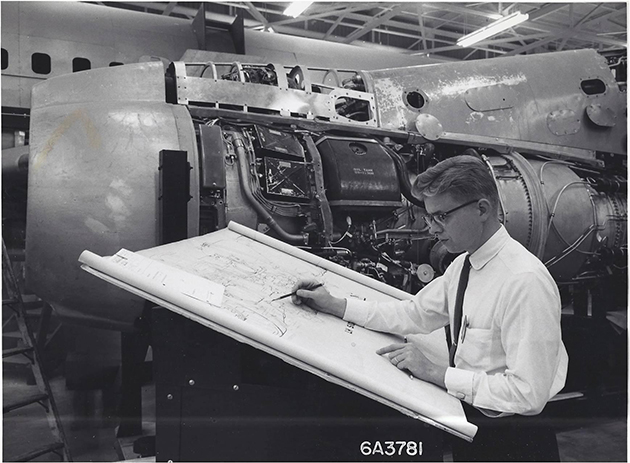 Bob Parks in a publicity shot for Boeing to promote the new 707 jet airliner.

I had the good fortune to like teaching and instructing, and I guess I was pretty good because Boeing asked me to do quite a bit of it.

Some of my most vivid memories are about the beginner mechanics' program we operated at the Renton (Wash.) Vocational and Technical School, initiated by President John F. Kennedy and funded by the government. It was designed to train unemployed and underemployed people so that they could be gainfully employed. It was called the MDTA, Manpower Development and Training Act. I designed it and operated it under the watchful eye of a government-assigned educator, a local professor.

We had applicants from the streets of Seattle and from the farms of outlying communities. Boeing was expanding very quickly for the 727 program as well as the 707 and we were in a mad scramble. The program was successful out of the blocks and we had to open up a night class from midnight to 8 a.m. to keep up with the demand, so I was the one who ran that section. We hand-picked the best mechanics in the company to do the instructing and oh, were they good! Many of them were from Airplane on Ground (AOG) crews and they knew their business.

One of the most amazing students in the program was a kid who hitchhiked from several hours away in Sequim (Wash.) to make it to the class. He was a quiet, nice farm kid who worked very hard. I noticed that he wasn't going out to lunch with the rest of the students and he didn't have a brown bag, either. It worried me because we weren't supposed to give any of them money and he wasn't getting any lunch. One day one of the kids announced that he was going out to lunch and he wasn't going to eat his bagged lunch. Then it happened again the next day with another kid, and as the first kid did, he left the bag on the bench with the boy from Sequim. This went on for quite a while, different kids leaving their lunch with him. I found out later that the boy was living in a sleeping bag under a freeway overpass until he could get enough money to rent a room. It really got to me so I started leaving some money in the lunches.

Several years later when I was walking through final assembly I heard someone calling "Mr. Parks," and one of my old students came up to tell me about his job and to thank me for showing him how to get there. That happened several times, including the kid from Sequim, who became a top mechanic at Boeing.

Another example was a Montana wheat farmer who hired on as a Boeing guard but was attending night school to get his high school diploma. Six years later, he stopped me in the engineering building to shake my hand and introduced himself as a Boeing engineer. I did a lot of things at Boeing and had a lot of fun, and some of that fun was seeing guys like these reach their goals.