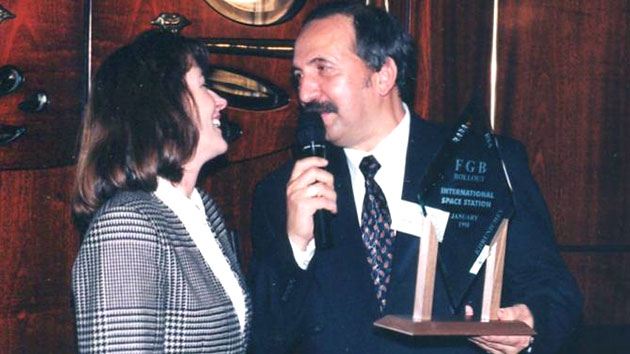 Virginia Barnes with Sergei Shaevich, the FGB’s Russian program manager with the Khrunichev Space Center, in Moscow in 1998.

The entire experience integrating the Russian element of the International Space Station was absolutely surreal. We had a small team of nine people, and if we ever stopped to think about what we were trying to do, I'm not sure we'd have attempted it!

The element, FGB, a Russian acronym, was launched in January 1998 for integration on the space station. They joked that FGB was an acronym "For Ginger Barnes." Our integrated Russian and American team became very close. They would visit my house for dinner and they even coached a local boys group through a contest to design a bridge out of balsam that would hold the most weight.

We worked well together wherever we were -- Houston or Moscow. It was challenging, and we just grew stronger as a team. We learned how our approaches to engineering meshed and how to honor cultural differences. The work -- the passion for what we were doing -- really brought us together. Instead of getting concerned when there were launch delays, we'd just add more capability to the module.

Throughout the project I had been learning some Russian -- just enough to be dangerous. I could shop and get around, and of course I understood the rocket terms because we always translated those in review after review. So for launch day, I planned to give my remarks in Russian. They would be brief because I was at the end of a long list of speakers. My Russian engineers helped with the translation and delivery. During the ceremony, English speakers wore a translation headset when a Russian spoke, and Russian speakers wore a headset when an American spoke. So I began my speech: "To honor my colleagues from Krunichev (the Russian company for the FGB work), I will give my remarks in Russian."

The Russians all took off their headsets and were so appreciative that I gave my remarks in their native language. I wanted to thank them in the most genuine way possible for their hard work. It was a life-changing experience that I'll always treasure.