I was getting a PhD in the study of infectious diseases. NASA was interested because they were getting ready to go to the moon in July of 1969. World health teams were asking NASA to do some kind of quarantine and protection so that in case astronauts came back with moon germs, they wouldn't be spread among the population of the world.

They really didn't have anybody with the specialty I had, so they hired me right away.

I went to work for NASA in February 1969. Then July came and they went to the moon. We're talking about Apollo 11 -- Neil Armstrong and Buzz Aldrin and Michael Collins were the astronauts, of course, who went to the moon first.

We were finishing up the Lunar Receiving Laboratory, getting it ready for when the astronauts and lunar material would come back to Earth. It was a large facility where all the moon rocks were going to be looked at by scientists. It also had living quarters, where the astronauts were to be quarantined for three weeks.

Since I had so much experience in infection control, I got to go on the recovery ship, the USS Hornet, to pick up the astronauts after their landing in the South Pacific near Hawaii.

The day of the landing, parachutes brought down the command module slowly. The astronauts came out in special isolation garments that covered their head and body and they stepped out onto a life raft on the water. Divers helped them get out.

The astronauts were picked up by helicopter and then the divers disinfected the life raft with material I had suggested. After the astronauts were brought to board the Hornet they went directly into what we called the Mobile Quarantine Facility, a trailer modified to be a quarantine facility.

That was an exciting time aboard the ship. President Nixon was there to have a welcoming party for the astronauts. They were in the trailer looking out the window, but there was a big welcoming home process that was on worldwide TV.

I had met Neil Armstrong before the flight. I tell people when I shake their hand, "You're shaking the hand that shook Neil Armstrong's hand."

They spent the rest of the time steering back to Hawaii in that trailer. Then it was trucked over to the Air Force airport and put on a large aircraft, and I got to fly back with them to Houston, where they landed at Ellington Air Force Base, not far from NASA. The trailer was trucked over to NASA and they pushed up against the building and into the living quarters of the Lunar Receiving Laboratory.

I would like to see the next generation go back to the moon. Mars is very exciting, too, because that's a much more difficult process. Going to one or the other is the most exciting thing I can think of. 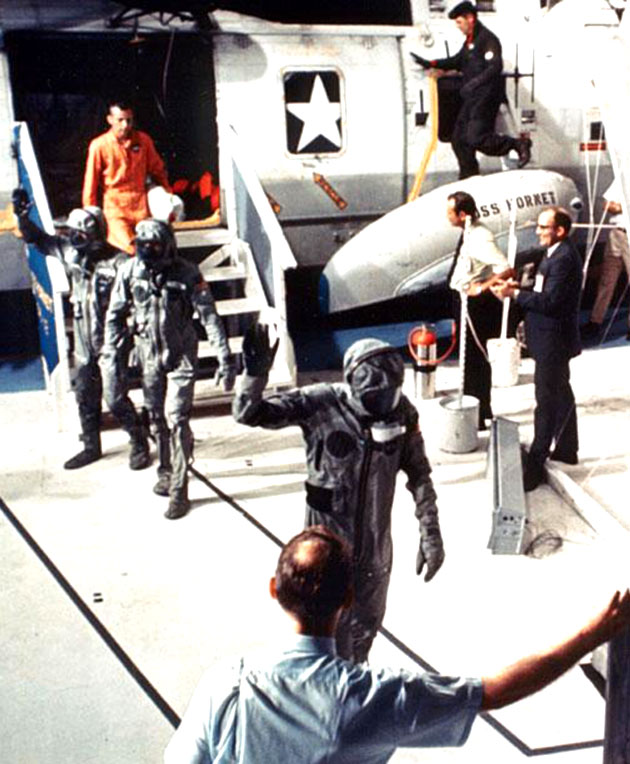 Hal Eitzen (foreground, with back to camera) on the USS Hornet aircraft carrier for Apollo 11 splashdown, with astronauts going into quarantine, in 1969.