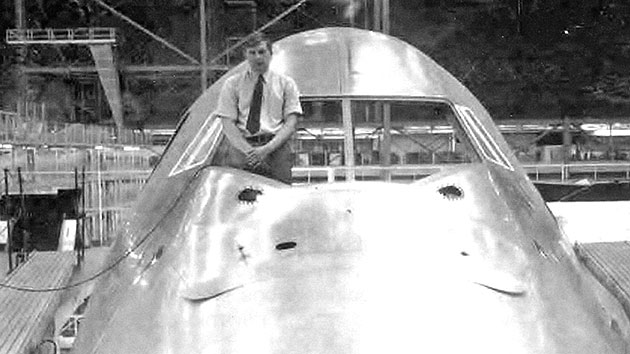 Jeff Ohlson standing in the nose section of the first 747-200 Freighter for DLH. This photo was taken by Elmer Manoske, draftsman in the 747 Flight Deck, on May 5, 1971.

Once the flight-test program for the Boeing 747 was underway, engineers sometimes had to go along on test flights to verify system performance or see firsthand system anomalies noted in "flight squawks" written up by the flight crews. My system, the air data system, was one that required me to tag along on test flights.

Occasionally, the flight-test plan was to fly the airplane out to MMO (maximum operating Mach number) or beyond. This involved a flight maneuver called "roller coaster" flying, where the pilots would gain speed by pitching the airplane down before pitching up again. Beforehand, they would flash a yellow light on the main deck to make sure all test individuals were buckled into their seats.

As the airplane pitched over during the maneuver, zero-G condition would occur for a few seconds -- and I recall sending a pencil across the fuselage to see its weightless flight. The pilots, of course, were quite used to this maneuver. However, to a young engineer right out of college it was quite a thrill, and when I called my lumberjack father afterward he simply responded with a "huh?"