During the summer of 2000, we flew the new 767-400ER (Extended Range) to the Farnborough International Airshow and then on a world tour, visiting 30 cities and 20 countries in 40 days. The excitement of an around-the-world tour can best be summed up by the amazing experience I had with a group of children in Nairobi, Kenya.

After taking numerous board members and senior officials from Kenya Airways on a promotional flight and hosting more than 2,000 people for a ground display, we were preparing to close the airplane for the evening when a group of children from a local orphanage appeared at the airplane.

They happened to be touring Jomo Kenyatta International Airport, and their guide asked if they could see the airplane up close. I said sure, opened the airplane doors and motioned for them to join me. But they just stood there on the tarmac. I kept waving until I realized the children hadn’t climbed stairs before (and air stairs aren’t the most comforting if you’re new to steps).

Recognizing the issue, I stepped down and reached out to help them up the stairs, in some cases holding their hand while they gingerly climbed each step. Once on board, the children joyfully relaxed in the first-class and business seats, and took turns in the sleeper bed. It was humbling and heartwarming to see how they marveled at the expansive airplane and all its features.

When it was time for them to exit, we faced a similar snag -- going down the stairs was just as daunting as coming up. Some held onto the handrail with both hands as they slowly descended and others scooted down each step, but the excitement from the experience was still on their faces.

I think this story captures the spirit of Boeing -- we bring people together across distance, language and culture. The Kenyan orphans did not speak English and I could not understand Swahili, but we connected while touring a commercial jetliner. By putting myself in their shoes and realizing how big and faraway that airplane must have felt, I was able to bridge the gap -- which Boeing does every day with our airplanes. 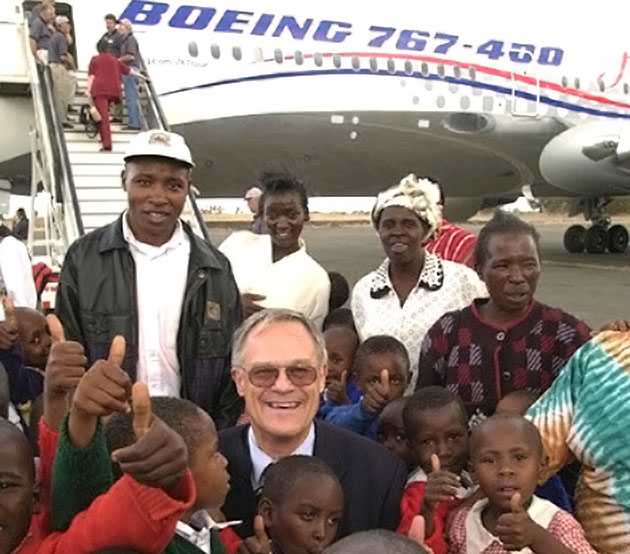 John Quinlivan shares in the excitement of Kenyan children getting their first view of the 767-400ER (Extended Range).