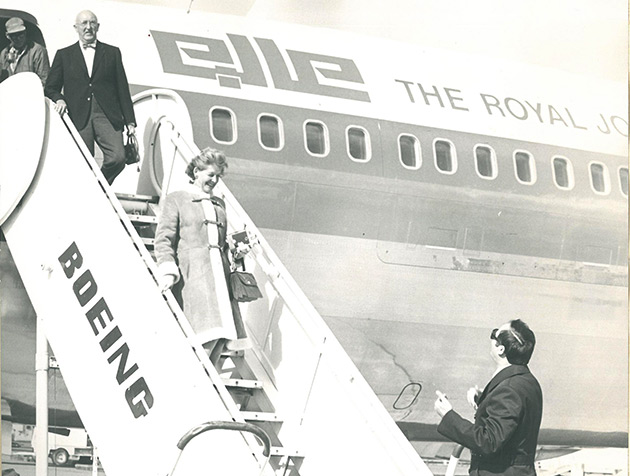 The first airline I helped start was in Lebanon. It was Lebanese International Airways. I was only 25 or 26 years old.

I left Beirut for Jordan and I met His Majesty King Hussein there. He knew about my aeronautical background. He asked me to start an airline, a national carrier -- Royal Jordanian.

In Jordan at that time, there were no mechanics, no engineers and only one person who knew about instruments; three co-pilots, with little experience, and one junior pilot; no tools; and one hangar, which was an empty shell.

One day His Majesty told me he had the approval of the Ex-Im Bank to guarantee to finance two 707s for Royal Jordanian. He gave me a letter to the president of the World Bank, and another to the chairman of The Boeing Company, Bill Allen. I went to Seattle to meet the Boeing people and to sign, to negotiate, an agreement.

When we were small, everyone wanted to help. But when we grew up and built some muscle, our competitors -- mostly regional airlines -- started fighting us. We started competing fiercely.

Whenever Boeing delivered an airplane, some important Boeing person came along. I knew so many Boeing people, who really became good friends of ours. They became like family.

I have photos of His Majesty's visit to Seattle, to see where they build airplanes, and at Bill Allen's home, where His Majesty was a guest. This shows you the friendship between the two, and how deep it became.

In 1989 or '90, when I last visited Seattle, I was invited by Clancy Wilde, one of the top Boeing sales reps, to go fishing on a beautiful yacht in Alaska. We fished there for three days and cooked those fish on board.

I learned something from Boeing, that what distinguishes it -- not only being a pioneer and building airplanes -- is a culture, their relationship with customers. No other manufacturer has it. The after-sales support they offer big and small airlines equally is their culture. I would like to say to the new generation in the company: Keep that culture, because it is the most important thing -- for them and for the airlines.

I'm really amazed that in only one century, aviation started like a hobby and a dream of the Wright brothers to the Dreamliner of today. That's amazing -- what progress! I flew on the Dreamliner -- a beautiful airplane, there is no question about it.

But the 707, from an engineering point of view -- the systems, the wings -- that was as if the engineer put it on the drawing board in a perfect manner. And from that airplane you can build other airplanes.

Aviation is a dynamic business. One theory is when you reach a peak, always look for the next one. And this is why I say dynamic, because there is no end to progress. This is innovation: It's progress.