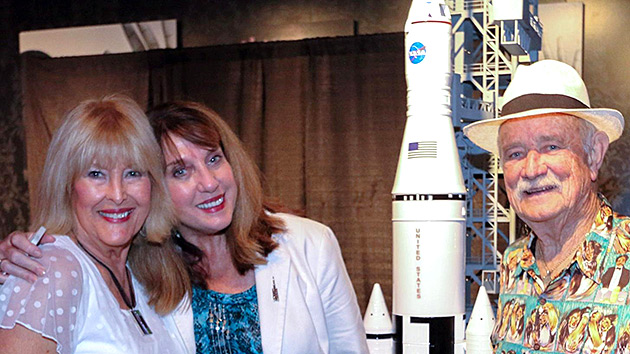 In the 1960s there was so much excitement about NASA and astronauts going to the moon. I was working in the Johnson Space Center in Houston in 1967, providing graphics support for the Apollo program.

There was a group of seven of us, graphic artists all in our 20s, and we had to put everything in picture form for presentations. This was before we had computers, so we did charts and graphs by hand -- using lettering sets and slide rules and that kind of thing. We also did manuals, flow charts, for what would happen to the lunar materials (moon rocks) when they were delivered to the NASA Lunar Receiving Lab, and who had first chance to view them, the geologist or scientist.

Wernher von Braun, the renowned rocket scientist, used to come to our building for meetings. We'd rush down seven flights of stairs just to stand by the elevator to greet him. He'd nod his head or say "good day," but that was enough for me.

Back then we were on 24-hour call and had no cellphones. If something happened during an Apollo mission, or anytime they needed data support, they'd call one person. And that person would contact the rest to come into our office to put out the fires.

My children were young when I started to work at NASA. But they were able to grow up in neighborhoods where a lot of the astronauts lived, and they went to school with the astronauts' kids. So they grew up with the same pride we had.

On weekends, if I had to go to the office, I'd take my kids, Kari and Kurt. Since we were in the Johnson Space Center headquarters, there were a lot of astronauts there as well. My kids got to be on first-name basis with them. My son, Kurt, was coloring one day in my office and astronaut Deke Slayton invited him to come down and color in his office. It was just like a family, and we were so proud to be a part of it.

July 20, 1969, when they landed on the moon, was one of the biggest highlights of my life. My office was on the same floor where they had a big conference room and our group was invited to watch the moon landing there. There were screams and shouts and prayers answered when they saw on the big screen: "Mission accomplished." We had chills -- it was an exciting time.

And when the astronauts splashed down, home from their moon mission, it was crazy. Along "NASA Road 1," just in front of Johnson Space Center, were big tents and bands playing and food and drinks. Everybody who was involved with NASA was there and sharing a dream come true.

It makes me feel so good to see my daughter carrying on this great tradition. Kari (Kelley) has worked with the space program for nearly 30 years at Boeing and at NASA. We're excited we're still connected to the space program through her.

It was a wonderful time. It was wild and crazy and fun. And now we follow the astronauts living on the International Space Station and are watching NASA, Boeing and the contractors build a rocket to send people to Mars. How exciting is that!