I have been an aviation enthusiast and plane spotter for as long as I can remember. I have my father to thank for this -- he worked as a carpenter for AerLingus, the Irish flag carrier. In the late 50s he brought me to my first air show, "The Blessing of the Fleet," at Dublin Airport. I have a clear memory of this -- I must have been age 6 or 7.

It was in the summer of '64 at Dublin Airport with my dad that I saw in close quarters the Boeing 707 for the first time. It knocked my socks off with its perfectly balanced beauty from nose to HF-aerial-tipped tail, from wingtip to wingtip with its nicely shaped turbofan engines. That plane was AerLingus' first. And although from time to time I had already seen their Boeing 720s, I thought the 707-320B/C model was the ultimate passenger travel machine of the '60s with its range and speed -- and so very good-looking to boot!

Fast-forward to the late '70s: It was April 1, 1979. I had met my girlfriend a few weeks earlier -- she was from Algeria and had come to Ireland to learn English. I liked her a lot, so that day I brought her on a date, a kind of plane-spotting endurance test, parked at the back of Dublin Airport with a view of the runway to see how that would go.

Lucky for me, I needn't have worried. Flying circuits for crew training, doing touch-and-go's, landings and takeoffs, was an ex-AerLingus Boeing 707 EI-AMW -- the exact same plane that impressed me so much 15 years earlier. Most amazingly, it sported AIR ALGERIE titles! What were the chances! I didn't know at the time the plane had come "home" from Algeria the day before upon completion of a three-month lease. ...

So that's my Boeing 707 love story: I go on a plane-spotting date with my Algerian girlfriend, and my favorite airplane, complete with Irish registration and Algerian flag carrier titles, entertains us for the afternoon.

That 707 spoke to us and you can guess the rest -- we've been happily married now for nearly 35 years and we've been blessed with a wonderful daughter and son. My wife and children love airplanes, too. In 2004, the four of us had the pleasure of doing the Boeing factory tour in Everett, Wash. ... 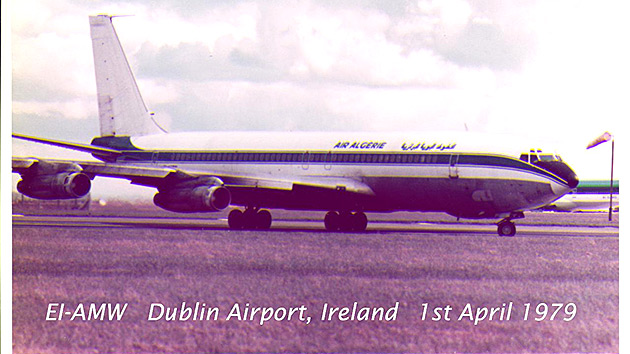