In 1990, I was working on a calculation of Boeing's earnings from a historical income tax perspective. This was a very interesting project because I was reviewing tax returns and financial data going back to 1916, as well as data for companies that Boeing had bought. But the story I want to tell is about my visit to an aluminum bunker sitting inside a hill at the Tulalip Indian Reservation.

I had found everything I needed to complete the study, with the exception of the 1934 tax returns. I searched in a number of places, even calling the IRS and United, since that was the year of the United reorganization. The Boeing Records Storage organization suggested I visit an offsite facility that had quite a bit of historical information. At that time, Boeing had a procedure requiring that important contracts and other company information be sent to this facility. The Records guy said he was taking a batch of contracts up to the facility and did I want to ride along and search the place. It sounded promising.

We get up there and all you could see was a door -- the facility was encased in a hill. So the Records guy gets a sledgehammer out of his car and explains the latch is tricky and he has found it best to pound it open.

We go inside and the first thing I notice is that the facility looks like a Quonset hut. There is an old refrigerator and several metal beds -- my guide explained the thinking had been that the hut could be used for protection during a catastrophic event. I found the Boeing corporate seal tucked in a drawer, banking information, payroll records dating back to the 1940s and other financial records, tons of microfiche, and old and new contracts. I went through everything, marveling over the existence of the hut and treasure trove of corporate data, but I never did find the tax return.

A few years after my visit, I heard the company stopped sending its contracts up to the Tulalip site and that the Boeing archivist had gone through it and collected what he needed for the archives. I plan to retire this year and will remember this as one of the most unusual experiences working at Boeing. 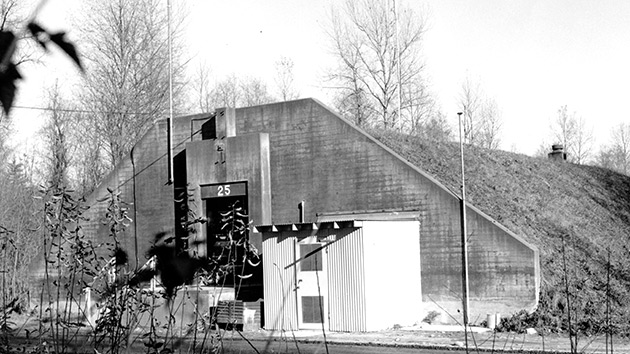 The vital records bunker at the Boeing Tulalip site when it was first set up back in the early 1960s.