I am so very proud to work at Boeing, where we provide safe and innovative products to our customers. Having moved to Washington in 2005, I set my sights on Boeing as an employer and didn't give up until it happened.

I was hired into Boeing in December 2006, on the 787 program in Everett. I was surprised to learn during my interview that the airplane was still in development and there was no actual plane yet.

My career at Boeing began during a snowstorm that closed my current employer's office and made it interesting getting to the site in Seattle to fill out paperwork and have my badge photo taken. What a surprise it was to learn I would start work at 6 a.m.! Being new to a production environment, I wasn't expecting those early hours. From the moment I started, though, I was proud to be a Boeing employee. Everyone in my family received a Boeing sweatshirt that first year.

The hours on the 787 program were long, but it was so exciting to see the plane progress from that drawing on my manager's wall to then watching the first part come into the factory, being at the rollout on July 8, 2007, standing in the cold to watch the first flight, and participating in the first delivery to ANA. The 787 will forever be "my" plane.

My husband, on the other hand, started working for Boeing in 2011 on the 737 program and he argues "his" plane is the better plane. It's fun to have conversations with him about things like butt lines, ailerons, swage -- all terms I had never heard working in banking and insurance.

I work in the Shared Services Group, where we provide the infrastructure and support to Boeing that help make new aircraft innovation possible. I discovered, though, that I miss the energy of being on an airplane program and I am transferring back to Commercial Airplanes, where I will be supporting engine management for the Next-Generation 737 and 737 MAX. I know I will love that plane, too, but the 787 will always hold a special place for me because it was the first plane with which I was involved.

The friendly rivalry with my husband continues, but we are both proud to part of Boeing's legacy. I expect Boeing to continue providing a quality product to customers for the next 100 years! 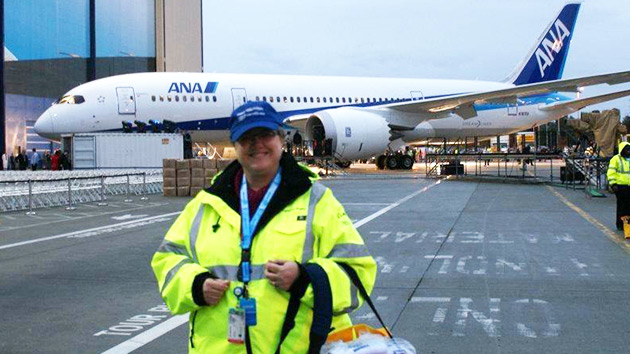 Catheryn English participated in Boeing's first delivery of a 787 Dreamliner to ANA (All Nippon Airways) in 2011.