I started at Boeing in 1943, when I was 16 years old, in Wichita, Kan. I took a three-week basic training class and was paid 50 cents an hour. Because I completed the course with a high mark I was offered a final assembly class, also three weeks. I was now a "skilled" mechanic. What's the difference, you may ask? Well, I would start at 65 cents an hour! I worked 10 hours a day, seven days a week.

My new manager took me into the factory and out through the hangar doors, then pointed to a row of B-29s on the flight line. I was a cable rigger, and he told me to go out to the last plane in the line, rig it and work my way back into the factory. I started on the last airplane when it was summer, and by the time I got into the factory, it was getting cold out.

The plant rang a liberty bell at 6 a.m., noon, 6 p.m. and midnight. That was to tell everyone another B-29 had rolled out -- four planes a day! Now you know why it took me so long to work my way inside.

I worked at Boeing until I turned 18 and was drafted into the Army during World War II. I arrived in Europe as an armorer at the end of the war. I served in Germany for a month and for a year in France, then my service was up. So Boeing rehired me in 1947, and I was still in Wichita. I started on the B-47 bomber, then transferred to the B-52 program as a wire shop manager. At the time we had 300 workers and 28 managers, with 30,000 people total in Wichita. I worked on the last 30 B-52G models, and when the program ended I was walking 20 people out of the factory every two weeks. Five years later, we were down to 28 people and one manager -- me -- and only 9,000 people at the site.

I found a new position in 1970 on the Apollo space program. So I transferred to become a manager on the Saturn V first-stage rocket engine program. Each engine generated 1.5 million pounds of thrust for a total of 7.5 million pounds. I worked on the Apollo 11 program until it ended. My last year there I was awarded "Employee of the Year" and an all-expenses paid trip with my family to see the only night launch of a Saturn V on the Apollo 17 mission. I met all the astronauts and their families.

After Apollo ended I had to find a new home in 1974, and went to Materiel in Seattle. I traveled a lot taking care of suppliers like Northrop Corp., which built the side panels for the 747, and Rohr Industries, which built cowlings and thrust reversers. After 747 production slowed down I went to Renton, Wash., on the 737 mock-up program. I followed mock-up back to the Everett, Wash., site, where I worked in 747 mock-up and on the 767 as it was started. I was a lead in the 747 and 767 mock-up electrical shop. When the 777 program started I worked on all three full-size mock-ups along with the 747-300/-400 and 767 Freighter.

After the mock-up was disbanded I moved into special projects and I was still working away until I retired at age 88. I'll never forget all the great memories I made here. 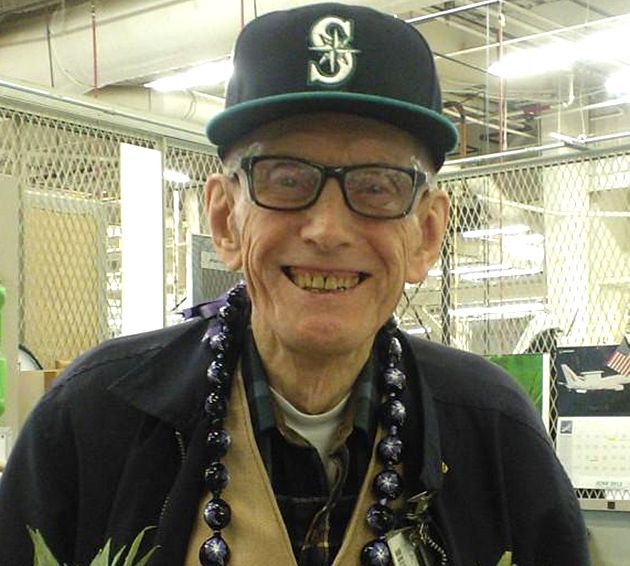 Herbert C. Moore started at Boeing on the B-29 program during World War II and worked on several other programs during his 68-year career. Highlights included meeting the crew of the Apollo 17 space mission.