I've been fortunate to work on many interesting projects during nearly 50 years at Boeing. Today I lead the "Special Projects" team that manages unique company projects. This includes recovering and restoring historic Boeing airplanes, many going to aviation museums.

One of the most memorable was the Model 307 Stratoliner, a Boeing four-engine commercial transport developed in the late 1930s. Only 10 were built, all for Pan American Airways and Trans World Airlines. The 307's design was innovative and included advancements such as a pressurized cabin, which influenced thousands of future commercial airplanes.

The only remaining 307 is the former Pan Am "Clipper Flying Cloud," tail number NC19903. It was donated to the Smithsonian National Air and Space Museum (NASM) in 1973, then flown to Arizona and stored there until 1991, when Boeing received approval to restore it to its original 1940s delivery condition. In 1994, it flew home to Seattle's Boeing Field, where a Boeing team spent seven years rebuilding the airframe, systems and engines in the same hangar where it was built almost 60 years earlier.

The 307 flew again in 2001, then again two years later to Dulles International Airport just outside Washington, D.C. There it joined other historic airplanes at the new NASM facility on Dec. 17, 2003. I considered this the end of my Stratoliner story until a few years later when I made a startling discovery.

My father, a property manager who never worked at Boeing, was fascinated with airplanes and aviation. He and my mother often drove to Seattle, always stopping at Boeing Field to "view what's new," as he told me. In the summer of 1939 they stopped in front of the Plant 2 main factory. There he saw an airplane that inspired him to shoot a couple of photos.

Sifting through boxes of family photos a few years ago I discovered a picture of an airplane -- taken in 1939 in front of that factory -- that caught my attention: a Stratoliner! Using a magnifying glass I read the airplane's tail number; it was NC19903, the "Clipper Flying Cloud" our team had restored. Words failed me!

My folks passed away long before my 307 story began. But each time I look at that photo I wonder what my father would have said had he known the rest of the airplane's story -- especially his, and his son's, connection with it. 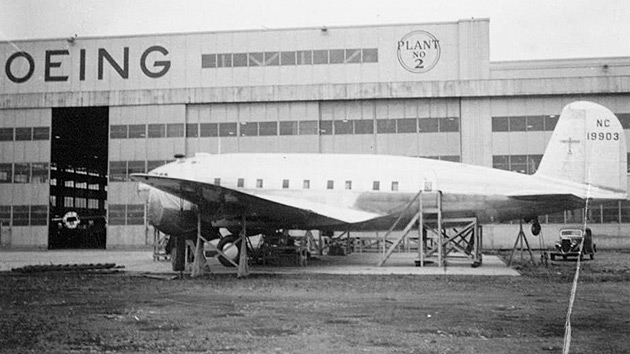 David Knowlen’s father shot this photo of the Boeing Model 307 Stratoliner in 1939. When David found the photo recently, he realized that he and his Boeing team had restored the airplane to its original condition more than 50 years later.