Being an engineer and having worked for over 30 years in an international bearing manufacturer company with headquarters in Ohio, USA, allowed me to fly for business purposes throughout all my native country, Argentina, the Americas from North to South, Europe and Africa.

My first flight was in a Boeing 737-200 operated by Aerolineas Argentinas, with destination to Patagonia. Later on, I flew the wonderful three-engines Boeing 727, and as time went by I had the opportunity to fly in all of the Boeing aircraft from the 707 through the latest model 787.

The flight that forever will be in my memory is the one from New York to Buenos Aires, Argentina, back in December 1984, in the Queen of the Skies, the Boeing 747-200 operated by Aerolineas Argentinas.

From that time I became an enthusiastic fan of the 747s. And so after my retirement as an engineer, I assembled plastic kits in scale 1/144 of all the versions of the 747 manufactured by Boeing, from the first one, the 747-100 for Pan American Airways, to the latest one, the 747-8 Intercontinental operated by Lufthansa, and even the 747-100 converted by Boeing to carry the Space Shuttle, and the military version E-4B.

The picture below displays all the 747 versions in scale 1/144 and is my tribute to a great plane and a great company in their 100-year celebration -- and 50 years from the first order for 25 747 planes from Pan American Airways on April 1966. 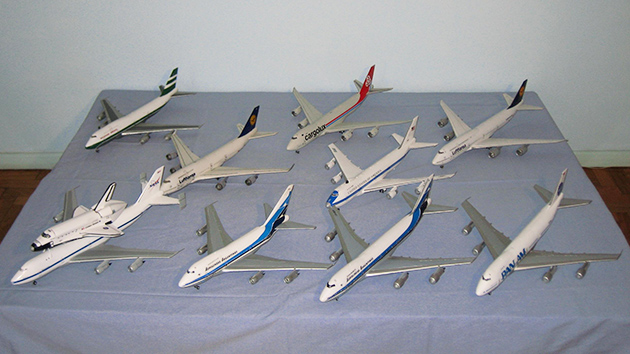 Retired engineer Claudio Rafart of Argentina has built scale models of all versions of the 747.