In 1999, I came upon a unique crew training device in a surplus yard. The device was a Boeing 707 digital flight simulator, serial No. 0001, which was buried under a tarp and had been there for at least 10 years. I felt extremely compelled to save the simulator rather than just pass by. After all, this simulator had played a role in the dawn of the commercial jet age and deserved be rescued.

Over the next few years, countless hours were spent researching and developing a foolproof plan to somehow restore and repurpose the simulator for future generations. Eight years later, along with the help of some generous Boeing volunteers in Wichita, Kan., we were able to deliver the B707 simulator to the Ronald Reagan Presidential Library in Simi Valley, Calif. The simulator was painted and themed in an "Air Force One" livery that still to this day is a centerpiece of the Air Force One Discovery Center, part of the library's presidential learning center that is visited by 25,000 fifth- and sixth-graders annually. 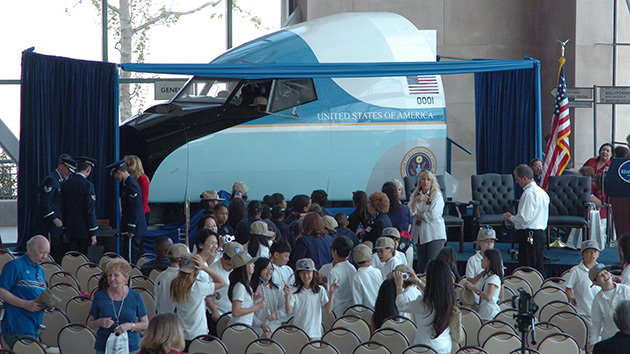 Students and other visitors view a restored Boeing 707 simulator on display at the Ronald Reagan Presidential Library in April 2007.