In January 2016 I flew on Zero G Corp.'s G-Force One, a converted 727 that carries both passengers and their psychological cargo: the dream of being weightless.

The process is unofficially known as the "Vomit Comet" from its days as a NASA training device, even though commercialism has made it far less nauseating. The airplane flies upward at enough of a speed and angle to incur 1.8 Gs, or 1.8 times the force of Earth's gravity. Then it "tips over" at the top of the parabola, flying downward at just the right speed and angle to make everyone in the cabin float weightlessly as it technically free-falls until the airplane pulls back up.

Our coach calls us to the wide-open part of the cabin and asks if we have our air sickness bags, at which point I realize I've forgotten. When the crew shouts "on the pull," which means we're about to fly on the parabola's upward path, I decide there's nothing I can do. Other than vomit on this comet, of course.

"On the pull" is an experience all in itself. It's possible to lift arms, legs, necks off the wrestling mat padding, but it's not easy. People with back problems would probably find it a liberating experience.

When I lift off, my body tells me to catch my balance. But I can’t -- I wave my arms, kick my legs, reach for the wall, and it doesn’t do anything. The safety briefing told us “no swimming,” even though the coaches know it’s a natural reaction to try to push through thin air like it was water, but there’s nothing to push against except a former boy band singer laughing maniacally as he spins upside down. Or am I the one upside down? In a cabin covered in white padding, it’s easy to lose your mind, body and orientation.

There must be some science that shows endorphins travel through the body quicker when they’re not battling gravity, because everyone’s brain is being flooded with natural happiness. It’s like being surrounded by people who have had just enough alcohol to be sloppy but fun. Bump into someone, and they laugh like you've been friends forever, even if you haven't said a word to each other. If only everyone in Chicago rush hour approached the crowded sidewalks with the same goodwill. My walking commute might be more enjoyable.

There must be some innate instinct in humans where breaking free from gravity -- a prison that not even a crooked politician, over-privileged rich guy or Buddhist monk can escape -- triggers a psychological and physical response that should forever be known as the "Woo!" Factor -- flown to you by Boeing. 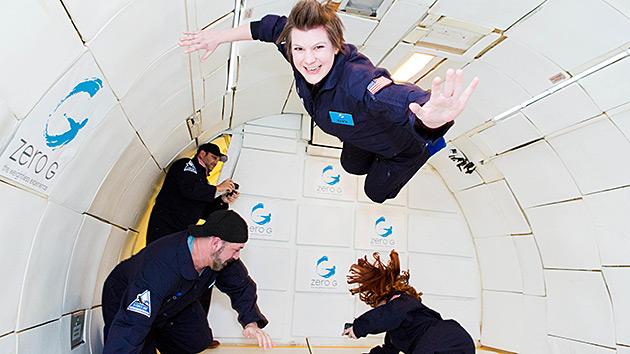 Flying high inside a 727