In August 1977, I was a 17-year-old who had just graduated from high school, getting ready to spend most of my savings on a three-week vacation to Hawaii. Thanks to some inspired advice from my dad, a Boeing engineer, I abruptly canceled those plans.

"You should do this," my father suggested in all seriousness as he handed me a section of the morning newspaper. "You can always go to Hawaii, but you'll never be able to do anything like this again."

The headline of the article read, "Pan Am plans pole-to-pole party on 747." It described plans for an ambitious flight from San Francisco via the North Pole to London; then to Cape Town, South Africa; over the South Pole to Auckland, New Zealand; and back to San Francisco. If all went to plan, the flight would shatter the existing Polar record first set in 1965 by a Boeing 707 freighter named "Pole Cat."

I was extremely fortunate to be able to obtain one of the 120 available passenger seats on Pan Am's Flight 50, which departed on Oct. 28, 1977, 50 years to the day following the airline's first scheduled airmail flight from Key West, Fla., to Havana, Cuba. Flight 50 was a nonstop party with a Gucci fashion show, champagne toasts over each pole, fabulous meals and unbeatable views out of the windows. Refueling stops of less than two hours each took place in the three cities along the way. The highlight of the entire trip was the daytime crossing of the pristine continent of Antarctica.

In 1977, the only aircraft capable of making these four ultra-long flight segments was Boeing's brand-new 747SP. Remarkably, this Special Performance 747 had been taken out of scheduled passenger service only the day before and, without any modifications, went on to set seven world speed and distance records that weekend. The elapsed time around the world over both poles was 54 hours, 7 minutes and 12 seconds, breaking "Pole Cat's" record by more than eight hours.

It was truly a weekend to remember. 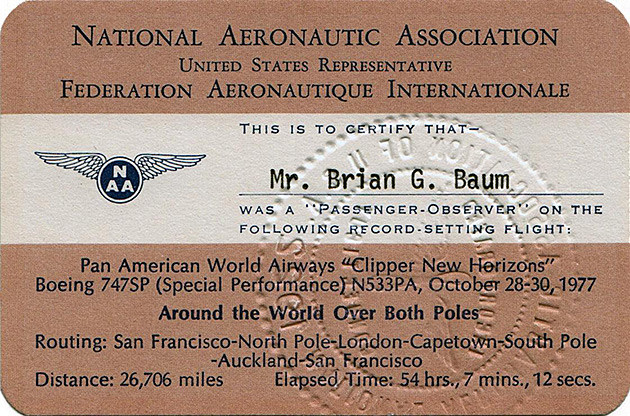 At 17, Brian Baum was on a record-setting pole-to-pole flight – and he has the card to prove it.