During my nearly 40 years with The Boeing Company the highlight of my career was becoming one of "the Incredibles" on the 747 program. I was a small cog in a very big wheel: One out of about 50,000 people who constructed the building or the airplane itself.

I started at Boeing in 1958 after my tour of duty with the U.S. Army. The B-52 program in Seattle had ended, and I was assigned to the Renton Division on some great programs, including the 707 commercial jet, the KC-135 tankers and the 727 program in 1963.

I was a supervisor in the 727 Seal, Bond & Paint shop in the fall of 1967 when I learned I was going to Everett to work on the new 747 Jumbo Jet program. I remember being very excited to be a part of this fantastic new program because of the immense size of the airplane. I would be working in what was to become the largest factory in the world by volume, 472 million cubic feet (13.4 cubic meters).

My first assignment was as a first-line supervisor in the Systems Planning group, where 747 chief engineer Joe Sutter's engineers were producing 75,000 drawings. All of their wonderful designs had to be planned out for the coming production of the 747.

The building was being erected as we worked, so it was mandatory to wear hard hats and rubber boots. It rained for 67 days straight, and the place was a sea of mud and flowing water. But nothing stopped our dedicated progress. We built the first 747 in 16 months while we were finishing the factory. Mal Stamper, the program's vice president and general manager, only took off one day in four years -- a single Christmas Day.

I am very proud to be known as a Boeing Incredible. I had the privilege of being called back to Boeing after my retirement in June 1995. I worked on contract for two years to support the exterior decorative painting on the 777 widebody airplane and some 737 twinjets. Later I volunteered at the Boeing Tour Center giving public tours of the factory.

Many of the original Incredibles are gone now, but they each left their legacy of setting goals and standards. God bless them all; I know I will never forget any of them. 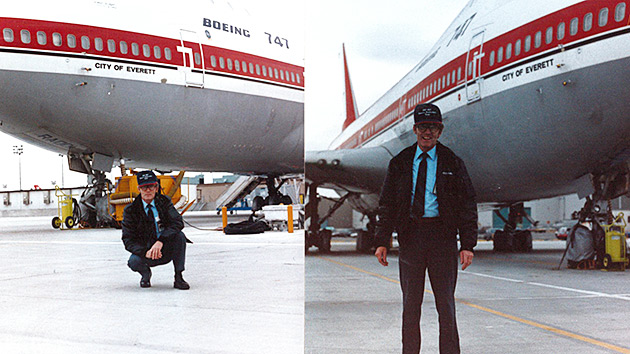 Desi Evans worked on the first 747 as part of his nearly 40-year career with Boeing. He was proud to be called an "Incredible," one of the huge team of people that constructed the first 747 and the 747 factory simultaneously.