My proudest moment working at Boeing was on a Family Day. I was giving a demo in the Tunnel Theater at the Everett, Wash., plant, and the entire room was filled with visitors. The volunteer at the door stopped my sister, my father and my mother and wouldn't let them in, because the room was filled to capacity. My sister, however, insisted they be allowed to pass because they were part of my family.

Having convinced the volunteer to be let in, they were escorted all the way down to the front, where I was performing the demo. As I saw my father looking on, I could tell he didn't really understand what I was doing or saying. However, his eyes were full of tears and I could tell he was very proud of me.

At that moment, I thought about my American dream, being part of the 2 percent of immigrants that work in a technical profession. Even after having been interviewed previously by a magazine, none of those accomplishments was as important to me as seeing my father so proud of what I was doing. Thank you, Boeing, for the opportunity to use my skills and share my knowledge for the past 25-plus years. 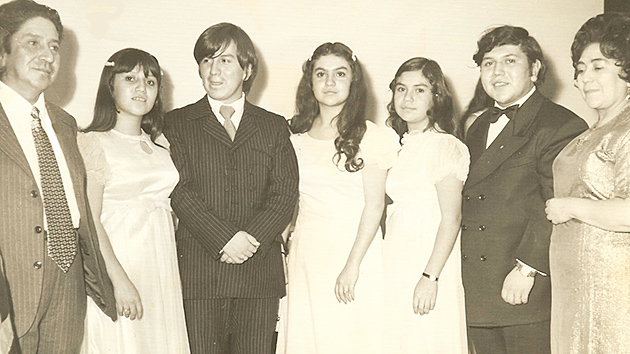 Colombian-born Inés Mayorga (second from left) with her parents, Juan Enrique and Maria Antonia, and siblings Henry and Luz Marina (both Boeing employees), Rosalba and Fernando.