My wife and I came to Japan to help say goodbye in our own way to the Boeing 747, the Queen of the Skies. Cathay Pacific Airways was operating its last commercial 747 flight on October 1 from Tokyo Haneda to Hong Kong. And so Ros and I were among her passengers.

I have many fond memories of flying on 747s, and most of my two million-plus-plus flown miles have been in a 747, especially with United and Lufthansa in the mid '90s till early 2000s, then with Cathay Pacific from then till now.

My first conscious flight was as a kid with my grandmother on a Pan Am 747 across the Pacific to San Francisco. I have stayed in most of the seats, from 1A in the nose of the plane, to all the way in the back row, to the upper deck rows 81 to 90. I experienced the first commercial SkyBed service of Philippine Airlines on a 747 in the late '80s, then the first fully flat business class seat on British Airways Club World. I was also fortunate enough to have done the Kai Tak famed nighttime approach from a window seat many times. And I can go on.

So pardon me if I get a bit sentimental -- along with flying the Concorde, the 747 is up there with my top e-ticket rides... 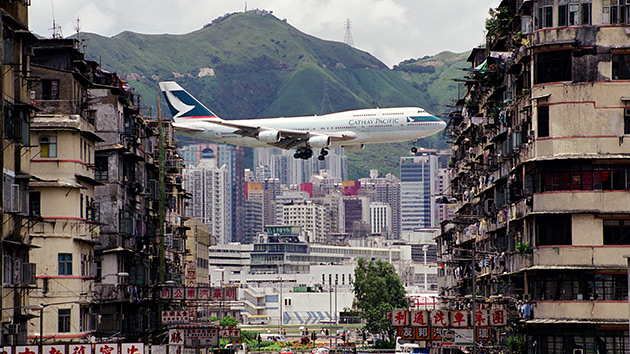 Famed Hong Kong Kai Tak approach of the Boeing 747 before the airport was relocated in 1998.