When the 777 was in its infancy, I was awarded the chance to participate in a ceremonial test flight as a guest along with the WA05 Flight Test Team aboard a brand-new 777. This was a cabin temperature and pressure velocity test that involved flying from Seattle to Montana and back on a Saturday morning. But things did not go completely as planned.

It was quite an interesting experience to fly aboard a Boeing aircraft that was so new. It was like riding in a new car prototype. And it wasn't like a traditional flight with a commercial airline, like you might be thinking, because Boeing engineers were swarming around the cabin like high-tech scientists running different tests and measuring things. I had been instructed to stay still for the entire flight while a large coat-rack apparatus with multiple tubes was placed right in front of me. Its purpose was to gather cabin air metrics from floor to ceiling around my seat location.

Once we landed in Montana, the crew and test subjects exited the aircraft to the bitter cold tarmac, where we were led to the vacant airplane hangar. Inside, were all treated to a catered steak barbecue with Christmas decorations and live entertainment by a local school's bell choir! It was spectacular.

Following the festive event, the crew and team were notified that, unfortunately, they had discovered a small issue with the brakes on the aircraft, and that the plane would be grounded until further notice. So we would need to hang out in the hangar for a while. This was, after all, a test flight.

Many hours went by, and still no resolution on the brakes. Engineers and mechanics continued to troubleshoot while the guests socialized and waited. By now everyone was getting hungry again, and any leftover food had since been consumed. In a heroic effort, a facilities employee unlocked all the vending machines and propped the doors wide open. "Help yourself to whatever you want!" he gestured.

Around five or six hours later, the brake issue had been resolved! The ingenuity and tenacity of Boeing engineers had prevailed. It was time to fly home.

Two things really made an impression on me during this adventure. Firstly, the good-spirited nature of Boeing employees during the big delay was commendable. Nobody complained or became anxious to go. Instead, everyone remained calm, patient and cheerful during the uncertainty. I was also really impressed with the perfectionism and quality of testing that Boeing puts into its aircraft. It's no wonder we produce the finest aircraft in the world. 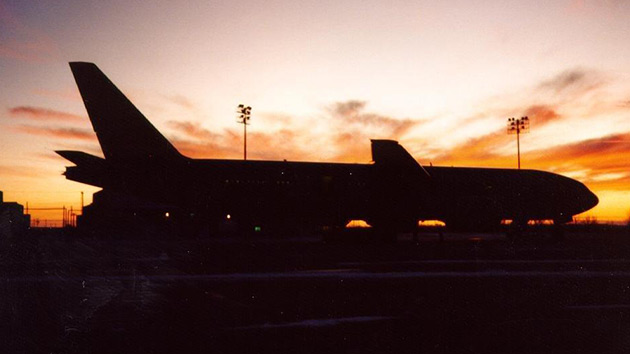 A 777 waits on a frigid Montana runway during a flight-test layover.