I perused Boeing's website one day after being hired in 2006. Amazed at Boeing's footprint, I thought: This company is far-reaching. On my first day while sitting in the Corporate Security office, I gazed at the space shuttle and military aircraft photos, with no prior clue that Boeing manufactured more than airplanes. I recall waking up early one summer morning to watch the space shuttle land. I was impressed that Boeing was a part of space exploration.

I attended a Boeing Family Day event in August 2007. My 9-year-old son, Joseph, fell in love with a flight-simulator activity that was set up, hosted by a military pilot. He had a blast "flying" in and around downtown Chicago buildings. He was the last child to leave that room and he got back in line several times to have another turn at flying. When we departed that afternoon, he shouted excitedly, "Mom -- that was so cool! I think I want to be a pilot!"

I met a Tuskegee Airmen Chicago chapter member and aviation professional at a Boeing "Airplanes 101" class in 2008. Afterward, the Tuskegee Airmen began sponsoring Joseph for aviation conferences, youth aviation camps, contests, seminars. He joined the Civil Air Patrol, took glider training at a flight academy, attended a Young Aviators STEM program sponsored by a Boeing grant and was the program's 2014 Boeing Scholar. He applied to the Tuskegee Next program, an inaugural first-of-its-kind, eight-week flight-training program, mirrored after the original Tuskegee Airmen experiences in the 1940s during World War II. He was first to solo and received his pilot's license on Aug. 5, 2015. The program received favorable media attention from local and national media outlets.

A week later, he flew with legendary acrobatic pilot Sean D. Tucker during the Chicago Air & Water Show's Media Day. He was published in Aviation Week magazine on Jan. 22, 2016. Now a high school junior, he launched an aviation club to give back to his community and share his aviation knowledge and passion with students.

I am beyond inspired by Boeing, its history, legacy, employees, its place in the world, its finger in my life. Working at Boeing has changed my life, especially as a mom. Boeing changed my son's life because he discovered his purpose and destiny. Boeing was providential in opening that door. His career goal is to fly commercial jets around the world -- preferably Boeing airplanes. It would be so befitting.

How often is one privileged to work for a company turning a century old? Out of all the companies in the world, I am so in awe of and so grateful for the Boeing link to our purpose and destiny, for the change to our lives. How special is that! 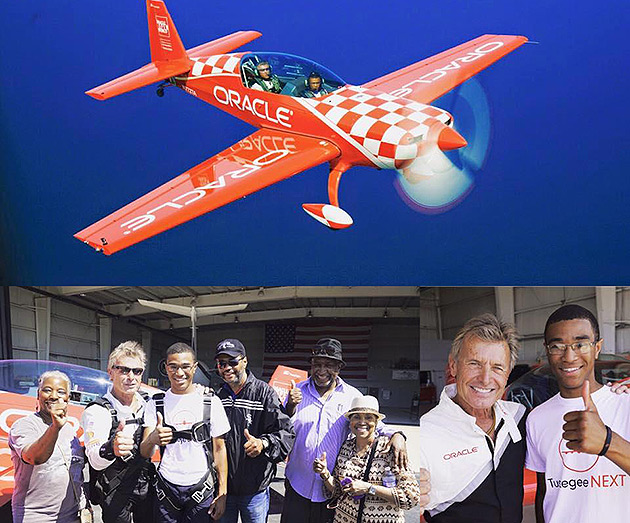