Though my injuries were permanent, they would not define me unless I allowed them to. When push came to shove, the only way I've recovered from stepping on an improvised explosive device and losing both legs while leading a patrol in Afghanistan was by staying open to new possibilities and experiences.

As I progressed through rehabilitation and adapted to my new realities, the decision to remain in the military or medically retire was torturous. As I watched the nonstop media reports of casualties from a suicide bomber, insider threat incidents and stories of soldiers being involved in mass firefights, it occurred to me that if I could not serve alongside my fellow soldiers overseas, I needed to find a way to support them from home.

To my surprise, I had found a way to apply my military expertise and passion to serve our armed forces while away from the battlefield. I could be their champion and advocate from my own vantage point in Washington, D.C., while they served far away from their families.

As a portfolio manager for Army Weapons Systems at Boeing, I am now part of a team that has a direct impact on our soldiers serving overseas. In my role, I define, create, develop and execute business development plans and support congressional strategy for a variety of Boeing initiatives. I interact with senior executives in industry and with senior government officials within the Defense Department and the Department of the Army every day, and am responsible for building and maintaining relationships between The Boeing Company, government agencies and trade associations in the Washington, D.C., area.

As the son of a West Point graduate who served 30 years in the Army, I always envisioned for myself a life of military service. I was on a fast track to becoming a career military officer. I strived to join the coveted 2nd Ranger Battalion upon completion of my 2012-2013 deployment to continue doing the job that I loved.

To serve alongside those who volunteered to risk their lives for one another and for their country was something I envisioned being part of for the rest of my life. I'm grateful nonetheless that I've found a way to pursue my passion, and I am excited by the potential for me to continue to uniquely contribute and make a difference on this path I've discovered. The Boeing Company gave me that opportunity and I am and will always be thankful. 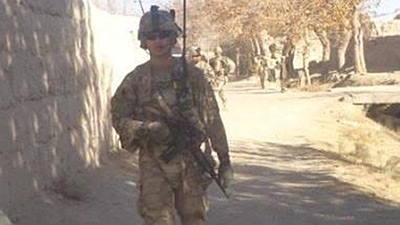 This is me on patrol in Panjwai, Afghanistan, around October 2012.