When I was a kid, I had a platonic passion for aviation. One of the old approach procedures to São Paulo-Congonhas Airport (CGH) just passed over my home. So, in this way, I always wondered where those planes were going. And how they fly.

But I always saw them from so far. I didn't even know about airplane models at that time. My family wasn't used to going to airports. The first time I went to an airport was in 1995, when I was 11 years old. That's because I asked my dad to do so. How curious I was about that and also because we were planning a trip to Orlando, Fla. So we needed to know a little more about our international airport (Guarulhos -- GRU).

The day finally came, July 26, 1996, almost 20 years ago. We were about to make our first airplane trip. When arriving at the boarding area, I saw for the first time the famous Boeing 747, just in front of me. I was mesmerized. But our plane was a Boeing 767-300, from TransBrasil.

When I was a kid, I wanted to be an 18-wheeler driver. I love trucks. But I was changing my mind to study to become an engineer. That plane trip would change my life. When entering the 767, I looked at the cockpit and saw just a little bit of that. I was really curious to see how that looked. Unfortunately, we didn't have the chance to visit the cockpit.

When I looked at the TransBrasil promotional card with all that data from the plane, telling the cruising speed, I got shocked. We were going three times faster than a Formula One car -- for me, at that time, the reference in speed. When we went airborne, but even on cruise and landing, I wondered how something so heavy flies -- and so fast. I was considering becoming an airplane pilot. I got that in mind.

Time passes and I became a mechanical engineer. But during the course, in parallel, I began my flying lessons. Also I worked at an airline as an engineer for five years and during that, I got my commercial pilot license. But I'm not currently working as such. Hope to begin as soon as possible.

For me, driving a truck or flying a plane has something related to freedom. Also, having such amazing machines under control. But above all that, a child's dream. I always say to myself: Never betray the 12-year-old boy who flew for the first time and got a love for aviation.

Those VARIG, VASP and TransBrasil Boeing 727s and 737s that used to fly thousands of feet over my home -- and mainly that Boeing 767-300ER, registration PT-TAE (I discovered sometime ago it's being scrapped in Victorville, Calif.) -- changed the direction of my life. They really made me become an aviation lover. And I really hope the next chapter of this story will be the experience of piloting a Boeing. The 100 Years Company that changed my life. 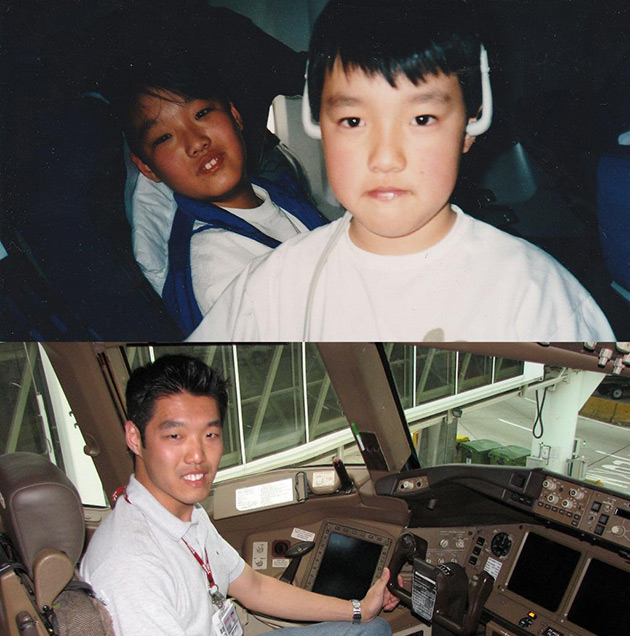 Claudio Koseki, top left, on his first flight; below, he sits inside a 777-300ER (Extended Range) flight deck.