Since 1916 when Bill Boeing began his aviation company, The Boeing Company has transformed the world of flight. Boeing has connected cultures, turned space travel into reality, expanded minds, and allowed generations to dream beyond today and look toward the future of aviation.

To celebrate Boeing's century of aviation, the Boeing Commercial Airplanes Training & Compliance team in Everett, Wash., flew 100 paper airplanes in the lobby of the 40-88 building.

The objective was not only to celebrate 100 years but to look toward the future to excite and inspire young people to join our profession.

You could feel the energy and excitement of our teammates as they lifted their airplanes up into the air and, on the count of three, let their planes take flight -- offering onlookers an impressive show of camaraderie, passion and a shared sense of pride. What a privilege it is to work here and be a representative of The Boeing Company!

The colorful paper airplanes were designed by Boeing engineers, and the team was fortunate to be joined by one of the airplane design engineers, Elizabeth Benson, who is a structural analyst for the 777X folding wingtip in Everett. 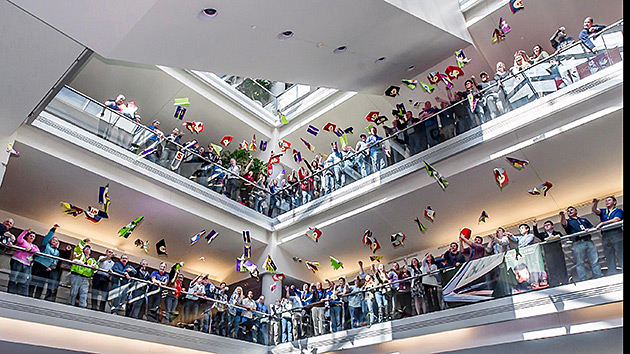