Since my childhood I was attracted by aeroplanes and grew up watching flying club and air force aircraft. I was so much fascinated by them that I developed a hobby of making aircraft models by cutting and pasting used postcards. Painting was also my hobby; I started painting my models in watercolors. During my school days, I participated in many art and science fairs at various district, state and national level and won many a prize.

Since then I have come a long way, and my models bear a close resemblance to the real ones. I do not use any marking before cutting, and the right proportion is achieved through eye judgment.

I did my four-year B.Tech degree in aeronautical engineering. Then I got selected by the domestic national airline of India, Indian Airlines, now merged with Air India ... After about three years, I was transferred to the airport office (base), responsible for maintenance of B737 aircraft. ... After another three years I was posted in the Production Planning & Control Division of the Engineering Department at the airport to look after the materials requirements of the hangars, line maintenance and various overhaul shops.

Then I was trained on B737 airframe and engines and acquired an aircraft maintenance engineers license for both. As a materials planner, I worked closely with maintenance personnel in hangars ... After working for around 15 years for B737 aircraft, I was made in charge of the section responsible for complete materials provisioning of 30 A320 aircraft, which had also been inducted at the same base ... Then I was promoted as overall in charge of the Production Planning & Control Division at the airport responsible for all planning functions of B737 and A320 aircraft. After spending approximately 26 years at the airport, I was transferred to the head office once again.

After working in this area for about 5 1/2 years I superannuated from the airline in 2013, after spending approximately 36 years in the airline, which I enjoyed thoroughly. Now I do some consultancy work in this field.

During my working life, I made aircraft models whenever I could find time. I enjoy their company these days. My model of B727 graced the office of my friend in Boeing U.S. for many years. 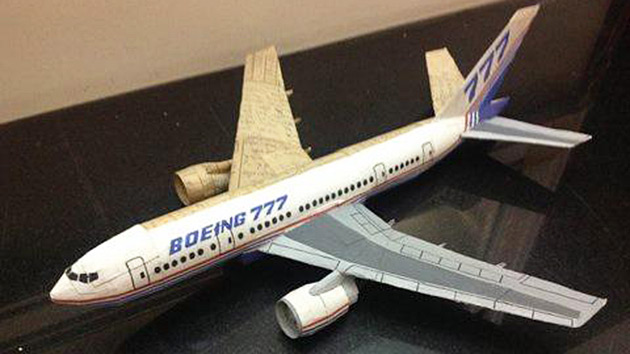 Model of a B777 made of used postcards, partially unpainted to show material.