I am telling this story for those who keep asking me what it was like to be a Boeing Incredible in 1969. Boeing Incredibles were those people who built the Boeing 747 in 16 months. We assembled the first 747 in snowstorms as they were constructing the building around us.

The Incredibles slept at their desks rather than to go home. I remember many times leaving to walk out to my car at midnight after working overtime. We were told in an all-hands meeting that if we did not FAA-certify the 747, we would lose The Boeing Company. Boeing management had bet the company when they borrowed so much money that we needed to build, certify, sell and deliver the 747s to remain solvent.

The engines were the problem. I flew 40 hours testing the engines for FAA certification on the No. 2 airplane. I wrote most of the 747 Engine Certification Document proving to the FAA that the engines functioned over the flight envelope. We pushed this flight envelope. For example, we had the pilot go to full thrust reverse at 120 knots (140 mph, or 220 kilometers per hour) while landing at Boeing Field.

As I expected, the engine surged. I filmed the surge with my 16-millimeter camera. Then I enlarged the frame showing the spectacular surge to 8-by-10 photos. I passed out copies at the office until the chief engineer said get them all back. I did, but kept one for myself. At the 40th anniversary of the 747 at the Museum of Flight, I gave a framed copy of this engine surge to Joe Sutter, the 747 chief engineer.

I remember during a preflight meeting at the Flight Center at Boeing Field, we stopped the meeting to hear on the PA system the first moon landing. That night while in the air testing the 747, the co-pilot came back and told us that the astronauts were walking on the moon. I never saw this until 20 years later. 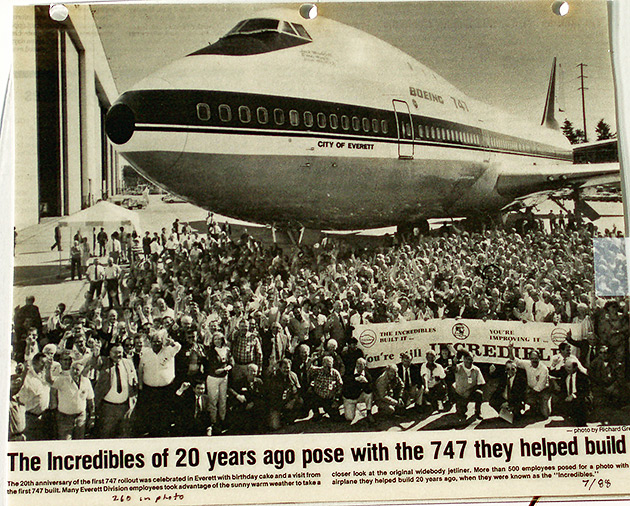 Dwight Bates and other "Incredibles" gather in 1989 by the Clipper Storm they built, tested, certified and delivered to Pan Am 20 years earlier.