Boeing has had a deep connection with me at various stages in my life. Boeing first entered my life in 1965 when my father, an Indian Air Force pilot, took an Air India Boeing 707 to fly to the USA to attend a six-month Flight Safety course. The family had gone to Delhi Airport to see him off. Airports in those days hadn't turned into fortresses. There were no security checks, no walk-through metal detectors, no frisking and no baggage screening. Visitors could walk right up to the departure lounge and bid farewell to the passenger at the exit gate -- which is what we did. With many tearful hugs, my father finally extricated himself from his wife and wailing children and walked to the aircraft.

What a majestic aircraft it was! Dressed in the finest livery, gleaming in the late evening tarmac lights, a monarch of all that it surveyed. ... My father waved at us from his seat, and kept waving till the plane taxied out. We kept standing there, transfixed; saw the plane rolling down the runway till it took off -- a giant bird with flashing lights, disappearing eventually into the night. That scene is still etched indelibly in my mind.

The plane had three halts: Beirut, Geneva and London. Forty years later, when I flew nonstop by Continental Airlines Boeing 777 from Delhi to Newark, I marveled at what a long way we have come ever since.

What better present to get for a 6-year-old and an 8-year-old than a battery-operated toy plane, and that, too, a Boeing 707! This is one of the gifts my father got for my younger brother and me from the USA. It was made in Japan and dressed up as a JAL airliner. After switching it on, the two inner engines used to start flashing a dark pink light, then the outer engines used to fire up and finally the plane would start rolling. A minute later, it would stop and the whole process would start anew. The nose wheel could be rotated, and with a turned wheel, the plane could go on and on in a circular motion. So fascinated were we with this toy that we would spend hours playing with it -- till the batteries got exhausted. Then there would be gloom and restlessness till the new batteries were bought the following month, along with other items, from the air force canteen.

One photograph from the training course was of my father with two U.S. Air Force officers examining the engine of a C-135 Stratolifter, the military version of a Boeing 707. We were certain that the officers thought very highly of our father and would have been very impressed by his knowledge and flying skills -- he flew C-135s as part of the course. 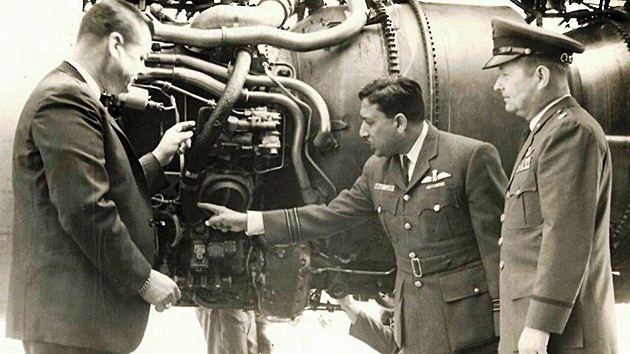 The author's father, center, examines a C-135 Stratolifter engine during a training course in the U.S. in the 1960s.