My father, Chelmer G. Witherbee (Curley), came to the Seattle area in the early 1940s from Glasgow, Mont. He was the oldest of five brothers, and they also brought their families out to the Puget Sound.

My dad joined The Boeing Company to help build airplanes for World War II. Saved up enough money to bring his fiancée out to get married and begin a family. Dad worked hard and purchased a home in the West Seattle area. Later a few of his brothers went into the military service. Over the years, all five of them worked on many projects for Boeing.

I was born in November of 1943 and became the “Bond Baby” mascot in Boeing promotions for U.S. Savings Bonds. My parents bought bonds to save for my schooling. Dad wanted me to become a teacher, but my heart was set on becoming an engineer. In the early 1970s, I was hired into The Boeing Company. Went to classes held down at Plant 1 and held inside the Red Barn building. (Later the Red Barn was moved to the Museum of Flight.) I made it through the training, passing all of my classes, and thus began my Boeing career!

My first job began in the Renton wire shop. Over the years, I worked in every area of the wire shop. Later I was moved to the PHM (Patrol Hydroplane Missile boat) program, which was located at both Renton and Pier 91 in downtown Seattle. This was like a PT boat that the Navy used.

Then I moved on to the Airplane on Ground (AOG) area. The King of Saudi Arabia’s 747 was an assignment I will never forget. This was the 1980s and the airplane was being modified for the customer by the AOG team. Women were not allowed on the airplane. The only women that were allowed were wives. I was the lead over all the mechanics and electricians, so I had to have special dispensation to be on that plane and be escorted by guards. They had a fence around that airplane inside the Boeing factory.

During my time with Boeing, I was one of the first women to be honored with a "MAN of the month" award for the Everett site, during the time of first 747 being rolled out.

My team also took four test 767s outfitted for three-person crews and made them deliverable as a two-person cockpit airplane.

The next step was that I was promoted from hourly to salaried in Manufacturing Engineering (ME) on the 747 and 767 programs in Everett, Wash. I had the privilege of being assigned to Air Force One. Later on, I moved to Renton to work on the 737, 757 and 73X (737-200) programs. While in Renton, we had a huge earthquake and we recovered without losing schedule.

I had the opportunity to start a training program for manufacturing engineers new to The Boeing Company, which also included the wire integration system. I trained over 165 MEs and assisted with placing these new employees into various ME groups. Over 40 of the students went on to become managers. This was fulfilling the "teacher" that my father wanted me to be! 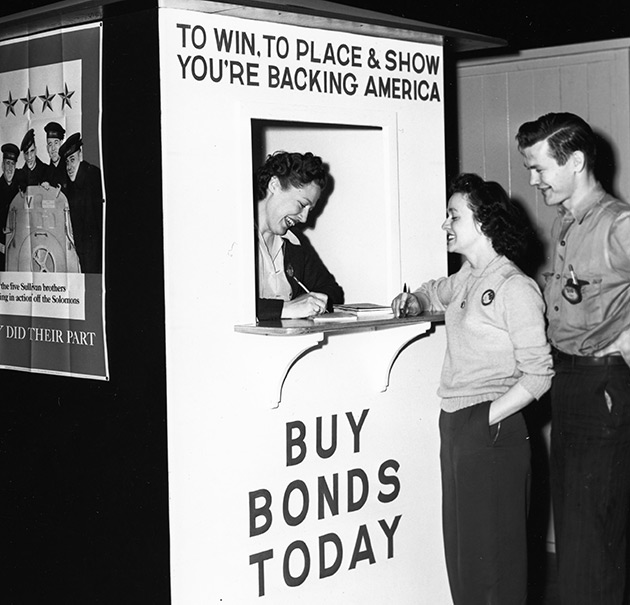 This historical photo from the Boeing Archives shows a sample of Boeing promotions for U.S. Savings Bonds.