The DC-3 Dakota is originally a Douglas Aircraft Co. aircraft, but after the merger of Douglas with McDonnell Aircraft in 1967, and the merger of McDonnell Douglas with Boeing in 1997, Dakota is now a Boeing aircraft, and a superlative aircraft at that! [Dakota was the British designation for the military version of the DC-3, also known as the C-47 Skytrain in U.S. service.]

My late father, a transport pilot, flew Dakotas in his initial years in the Indian Air Force. He was posted to 12 Squadron in Agra. This was the first squadron of Dakotas in the IAF. He was engaged to my mother, who lived in Delhi, three hours away from Agra. One day he was flying to Delhi on a routine sortie. Bent on impressing her, he deviated from the regular flight path and turned the airplane toward her house in central Delhi. Flying low, he dipped the wings from side to side over her house. Taking a turn, he repeated the feat in the reverse direction. By this time, the entire housing colony was gaping in disbelief at the goings-on in the air, much to the embarrassment, and delight, of my mother.

Later, a detachment of the squadron was sent to Srinagar, in Kashmir. Briefing at 4 a.m., takeoff by 4:30 a.m., two to three sorties a day, frequent long waits for weather clearance -- elements conspired to make life very difficult indeed! I recall my father getting up at 3 a.m. every day, drinking a hot cup of tea made by my mother and leaving for the airport on his scooter at the height of the Kashmir winter.

He also flew several sorties to Leh in Ladakh. Leh is one of the highest airports in the world, at 10,682 feet. Imagine flying the unpressurized Dakota over the mountain ranges in Kashmir that are much higher than its optimum flying ceiling, necessitating unwieldy oxygen cylinders and cumbersome clothing to protect against the cold.

Add to that the bumpiness owing to the weather, only visual flying and landing, no landmarks in the winters when the landscape wears a shroud of white, no question of any safe forced landing in an emergency, and one gets an idea just how tough and unforgiving the conditions could be. Even though from the air the majestic landscape stands out as an unforgettable sight, it is no compensation for the strain and rigors that the crew had to undergo. In no other country did Dakotas have to cope with flying in such challenging conditions!

My own experience with the DC-3 happened when I was very young. My first flight was from Srinagar to Pathankot. Because of the lack of cabin pressure and the bumpiness of the flight, many passengers, including my mother, turned sick and vomited into a bag placed in front of the seat. Of course, one doesn't often see such bags these days.

Seeing a Dakota these days is a very rare sight. I haven't seen one flying for a long time now. There is a Dakota parked in the Air Force Museum at Delhi airport, and the "Gooney Bird" never fails to give me goosebumps. 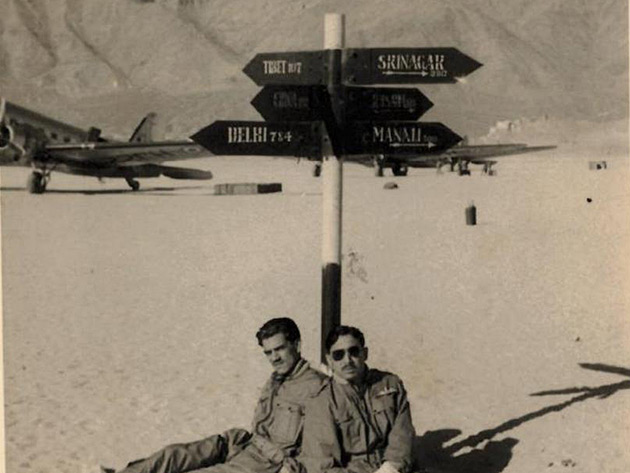 Ajay Mankotia's father (right) at Leh airstrip, one of the highest in the world. A Douglas Dakota is in the background.