In January 2006 I finished reading the book "747," written by Joe Sutter. I've been a fan of commercial aviation and have written many articles for magazines and newspapers in Colombia and abroad. Then I had a "crazy" idea. I called a friend at Boeing in Seattle and told him that, after reading this fantastic book, I wanted to interview Mr. Sutter. That was a Monday.

The next day I got a call from Mrs. Lee, secretary of Mr. Sutter, who told me he would call me the following Thursday at 10:30 a.m., Colombian time. I could not believe that this man who was so important would call me. That gesture seemed to me extreme kindness, particularly because Mr. Sutter did not know me and I thought I was "crazy" for trying to interview him.

Indeed, exactly the time that he told me, I got the call. In short, I was talking with him for one hour and 10 minutes. The full interview was published in Aviation magazine and occupied 12 pages. I mailed Mr. Sutter two copies of the magazine.

Two years later I had the idea to interview Mr. Randy Tinseth, vice president of marketing for Boeing Commercial Airplanes. Also, I called my friend and we agreed on a date for me to go to Seattle. But I took that opportunity to tell my friend to try to take a moment to go say hello to Mr. Sutter.

Mr. Tinseth received me in his office and very kindly answered me a great many questions, some of them difficult to answer. Just over an hour I was with him. I was accompanied by my friend at Boeing, and when we leave the office of Mr. Tinseth came a greater surprise. My friend told me to go to the office of Mr. Joe Sutter, because he wanted to invite me to lunch. Wonderful! I was going to have lunch with an icon of commercial aviation.

We arrived at the office of Mr. Sutter. He was at his desk. Then he got up and without saying anything went to a chest of drawers and pulled out something I did not see. Then he came to me. He stretched out his right hand, and in his left hand he showed me what he had taken from the drawer and said, "Here is the interview that two years ago you made me."

Frankly, that gesture touched my soul, and for a moment I could not see well because my eyes were filled with tears. Once more I became convinced that Joe Sutter was an extraordinary human being.

Unfortunately Joe died in this year's centenary of Boeing, but with much pride I show in my studio picture I have with him in his office, and his autograph. 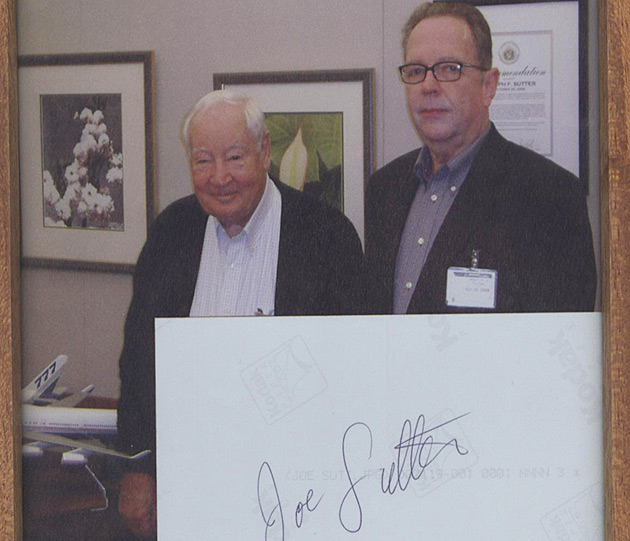