At the beginning of my career, I worked on many aircraft now considered relics -- Douglas DC-3s and DC-4s, Vickers Viscounts, Fokker F27s, Avro 748s and Caravelle SE210s. But in September 1974, everything changed.

I embarked on an epic journey as part of a five-man crew: Capts. R.A. Williams, K.D. Menon and H.L. Das plus a navigator, radio engineer and myself, an A&P mechanic. We flew from Bombay to Tehran, then to Tel Aviv, Paris, Copenhagen and Seattle. We took our first steps inside a place where history was made -- the Renton factory. I remember staring in awe at the sheer size of the factory, larger than any hangar I'd ever seen, with all the unfinished aircraft lined up and eagerly waiting their turn to fly.

We took delivery of VT-ECQ, a brand-new 737-200 powered by two P&W JT8D-9A turbofans. After spending the first two days touring the factory, meeting various Boeing representatives and attending technical briefings, it was finally time to see what our new aircraft could do. Accompanied by the experienced and knowledgeable Boeing test pilots, we accelerated down Runway 15 and took to the skies. After testing the aircraft's state-of-the-art features, we admired the beauty of Mt. Rainier from 30,000 feet. That evening, Boeing's vice president held a reception and dinner in our honor -- a group of aviators bonding through the unique gift of flight that we all shared.

We began our marathon journey back home, putting VT-ECQ through its paces in the varying climates of Montreal, Gander, Reykjavik, Frankfurt, Ankara, Kuwait, and Dubai. I remember looking out of the window at the frozen seas below me, and Capt. Williams reminding me of the danger below if we had an emergency -- but that was unlikely, for this was a Boeing aircraft, a symbol of safety and flightworthiness in the modern jet age. During a pit stop in Frankfurt, we replaced the autopilot pitch computer with an instrument loaned from Lufthansa. The rest of our trip went flawlessly, and we landed safely home in New Delhi with memories to treasure and stories to tell our families for decades to come.

From cleaning the toilets and sleeping on the wings of a DC-3 in 1953 to climbing into the engine of a 747 in 1993, to relaxing in the luxury of a 777 in 2003 -- my career took me near and far, imparting vivid experiences that the common traveler can only hope to achieve in his or her lifetime. Of all the experiences, the trip I made in September 1974 is special. It marked the beginning of my relationship with Boeing, the company that revolutionized aviation and continues to do so in the 21st century. 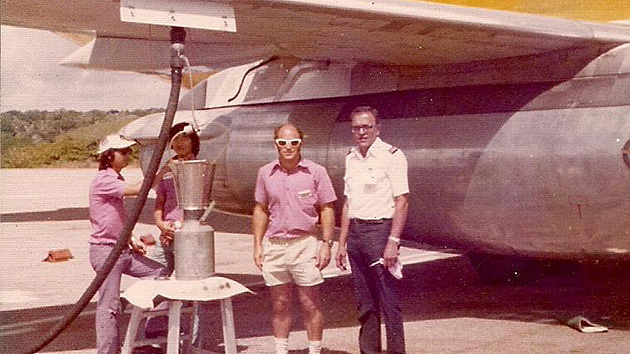