I was born in Czechoslovakia on Nov. 19, 1916, and am a proud Boeing retiree. I met my late wife, Margaret, in Germany and we immigrated by ship to Canada in the 1950s. We landed in Halifax, Nova Scotia, with only a small container of our belongings and worked for a sponsor family for a year.

I got a job at Canadair in Montreal and worked there until Boeing recruited me in 1956. Boeing had five Model 707 orders from Pan American Airlines that they were afraid were going to be late, so they hired 68 guys from Canadair, including me. My wife and I settled in East Bellevue and I reported to Renton, where I worked on 707 Interiors Tooling. I also worked at Plant 2 in Seattle on the 737 and then moved onto the Everett Plant, where I worked on the 747. I was a tool design engineer and a lead engineer for 16 years and retired in March 1985 after working for Boeing for 29 years.

I was excited that my daughters, Rose and Jenny, found husbands who started their engineering careers at Boeing, too! One of my sons-in-law, Rex Douglas, still works at Boeing and the other, Paul Bohner, worked for Boeing for 21½ years before leaving to work for an airplane leasing company.

I lived independently in my house until I was 98½ years old. My sons-in-law still tell me Boeing stories, which I always enjoy hearing. I met so many wonderful people in my years at Boeing (Gordy Duncan, Otto Flach, Kurt Bald to name a few), have outlived all of them, but certainly have fond memories of them and our years together at Boeing. I have been excited about Boeing’s birthday celebration for many years and was there to celebrate this special occasion with my family. 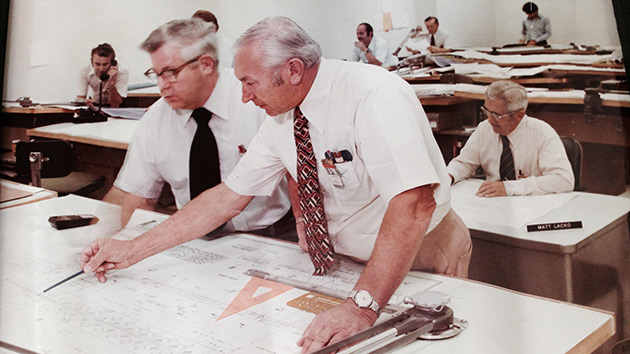