My childhood home in the hills south of Pittsburgh, Pa., wasn't exactly a hotbed of aviation activity. But that didn't matter, because I had my 747.

Now, I'd been interested in aviation since before I could walk, to hear my parents tell it. I was explaining to people how jet engines worked (with the help of a diagram from a favorite book) before I was reading. But the most personal connection I had to the world of flight floated over my backyard late every afternoon.

We weren't near the airport, or under any of the most-traveled flight paths, but it happened that every day in the late afternoon, maybe 4:30 or 5:00 p.m., British Airways' inbound 747 from Heathrow (via New York or Philadelphia, depending on which part of my childhood) would be visible on its way into Pittsburgh International Airport. It was always at the perfect height, the ideal point in its landing evolution to awe a child -- low and big enough to pick out details like its four engines, but high enough (and idling on descent) so that it was absolutely silent.

And so, every day, there I was on the little hill in the backyard just before dinner, my head tilted back to watch the most beautiful of all possible machines float, silent and graceful, heading northwest toward the airfield. I was awed by the 747, amazed that something that big could fly, captured by the romance of who was on board and where they were coming from or going, hungry to understand how it worked.

I'd race back to my room and build a cockpit to fly my own plane, or draw endlessly until I could make the 747's nose look just right or lay out an airport in the basement to welcome jumbo jets from around the world.

Eventually we moved, and I grew into other toys, and then into textbooks, but the magic of that daily, silent vision of flying majesty never left me.

I watched with equal awe as Boeing developed, flew, and delivered the 777, even maneuvering my patient father into a roundabout routing of an eighth-grade trip that would include a domestic 777 flight one way and a 747 leg the other. (Alas, the latter was canceled, and I've yet to board a 747 as a passenger.)

In high school I fell in love with math and physical sciences and went on to engineering school, from whence applications to Boeing were an obvious step (particularly from a school just on the other side of Washington state). To come into the company and immediately go to work on what may be the last iteration of the great 747 was a dream come true. The next big opportunity brought me to the 777X program, getting to work with a number of engineers who were instrumental in making the original a reality 20 years ago.

When I look out at the flight line across the street from my building, I know I've always belonged here. And every once in a while, a 747 floats into view.

That feeling? It's still there. 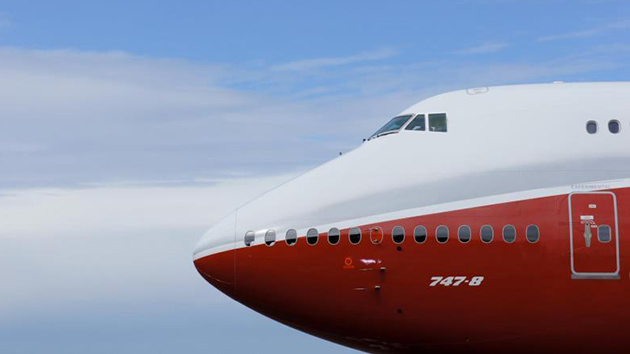 The 747-8 Intercontinental, after completing its first flight.