I am 50 years old and have a son and three daughters and live in Manchester, England. Approximately 60 years ago my mum's only brother (my uncle) was privileged to move to Seattle to take up a rare and unique career opportunity with Boeing.

Very sadly, on the 31st of August, 1959, he was killed on the way to work in a car crash on a Seattle bridge, leaving his wife and 6-month-old baby. My own mum suddenly passed away in September 2012, and I have been reading the newspaper article she kept from the time of her tragic loss. I'm sure this was also a loss to Boeing. His name was Roy Carr. I have little family. My dad was an only one, and I guess so was my mum, having lost her only brother, whom she deeply adored.

The attached post card was written by Roy in 1957. It is a photo of the Lake Washington Floating Bridge, and Roy writes, "I drive over this to the plant every day and it's really beautiful." The attached letter from the foreign office explains that this was precisely the place where his life was taken, indeed on the same journey to the Boeing plant.

It is ironic in 2016 that Joseph, my only son, is about to start his final academic year at Sheffield University England, studying aerospace engineering. He is a very bright young man, and he is almost 21 years of age. He is keen to embark on a career in the footsteps of Roy, footsteps that sadly never were. 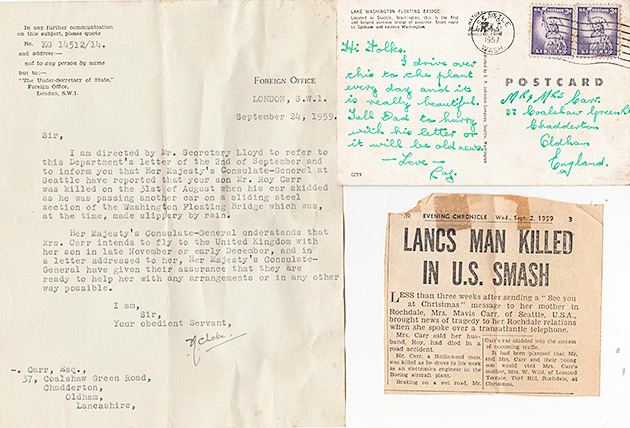 A letter from the Foreign Office London, a post card written by Roy Carr and a newspaper clipping commemorate a tragic day.