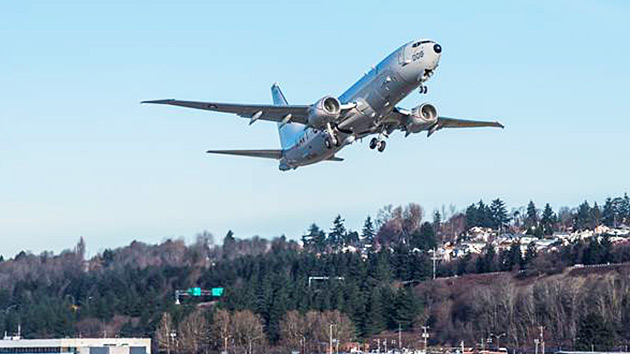 The 50th P-8A Poseidon maritime patrol aircraft delivered to the U.S. Navy takes off Thursday from Boeing Field in Seattle on its way to Naval Air Station Jacksonville in Florida. The aircraft was the P-8 program’s 18th delivery of 2016.

The 50th U.S. Navy P-8A Poseidon lifted off from Boeing Field in a celebratory beginning to the new year, departing Seattle, Wash. en route to its new home.  The U.S. Navy had accepted delivery of the aircraft at the end of 2016.

Jeff Bair, the mission technicians lead for the final step of the P-8 Mission Systems Installation and Checkout process, summed up his team’s thoughts about the milestone.

"I have had the pleasure of working with these techs since the first test aircraft flew here from the 737 factory in Renton [Wash.],” Bair said. "We all agree this is an exciting and challenging program to work on, and we can’t wait to get started on the next 50 aircraft.”

"This milestone demonstrates your outstanding work ethic, professionalism and dedication to the fleet,” Rossi said. “Thank you for your support. I’m humbled to be part of this highly successful team and proud of our accomplishments. Keep up the great work."

Over the past year, Boeing also delivered 17 other aircraft to the Navy, as well as the inaugural P-8A to the Royal Australian Air Force. The company delivered all 18 ahead of schedule.

"The entire P-8 team is proud of the work we do to support the U.S. Navy — it’s a real honor," said Jamie Burgess, P-8 program manager. "This 50th U.S. aircraft is an important symbol of the commitment we’ve made to equip the fleet with the best maritime patrol aircraft in the world."

The Navy is under contract with Boeing for 80 P-8As, with a total requirement for 117 of the 737-based antisubmarine warfare jets. In addition, the Royal Australian Air Force is under contract for eight P8-As as part of a cooperative program with the Navy, and four additional Poseidons have been approved and funded by the Australian government. The United Kingdom also plans to purchase nine P-8As.

The first U.S. P-8A squadron deployed in November 2013 to Kadena, Japan. Since that time, P-8A squadrons have accumulated more than 84,000 flight hours.